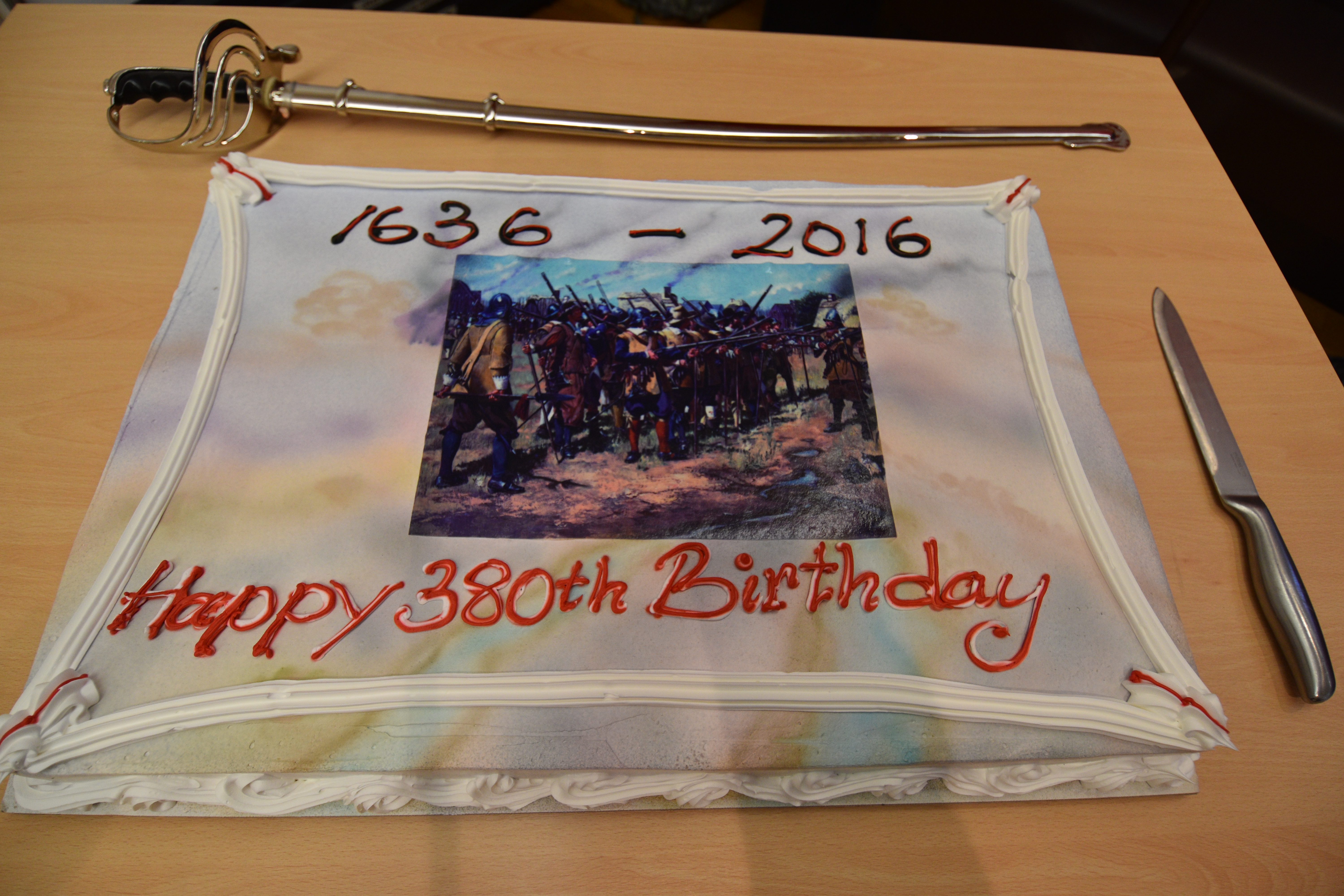 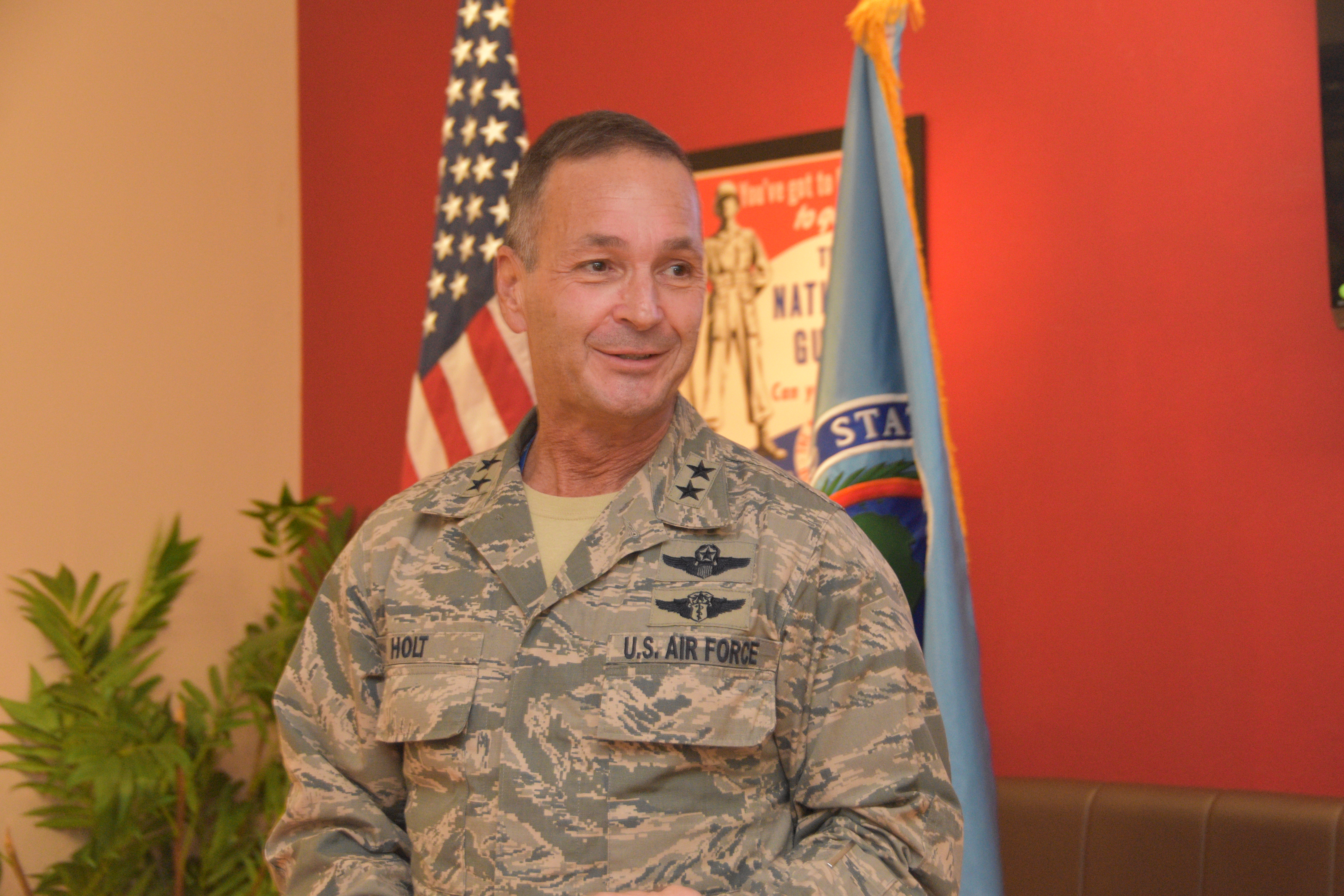 STUTTGART, Germany - “Always ready, always there!”  That’s the motto of the National Guard. The Guard is celebrating its 380th birthday on Dec. 13 and Guardsmen and their families and friends from both U.S. Africa and European Commands gathered at the U.S. Army Garrison Stuttgart for an early observance on Dec. 9.

The event, sponsored by the National Guard Association of the United States, featured AFRICOM Special Assistant to the Commander,  Maj. Gen. Worthe Holt, Jr, as the key speaker.

“On the occasion of the National Guard birthday, it provides an opportunity to recall how it all began because it’s such an important part of our history and our culture,” said Holt.  Commenting on a painting that was on display called “The First Muster,” Holt recounted that he’d grown up near Boston near where the scene portrayed took place.

“First Muster occurred in the 1630s,” said Holt.  “Fully ten years after the Pilgrims landed at Plymouth Rock, people who were there, and these were farmers, blacksmiths, carpenters, and other professionals, were beginning to feel threatened - and they were wondering  how they were going to deal with this, so the Massachusetts General Counsel in Salem basically established the militia.

“They called to action all able bodied men between the ages of 16, not 18, but 16 to 60 to come together as required and defend the colonies, and there were four at that time, and their neighbors and families, and that was really the beginning of what is now the National Guard.

“So today we celebrate the birthday of that, which is Dec. 13, 1636 and here we are 380 years later, still representing people who are employed and work in our communities, but yet are ready to put the tools of their trades behind and step up and take the fight when it’s necessary to defend our country, to respond to natural disasters, to provide humanitarian assistance, and all the various things that characterize the National Guard.”

Among the attendees was AFRICOM Director of Plans and Strategy (J5), Maj. Gen. Barre Seguin, who, although not a Guardsman, talked about the role of the National Guard in the State Partnerships with various African countries, a program that is essential to AFRICOM’s mission to build relationships across the continent.

“The Guard is a valued teammate actively engaged in building African partner capacity,” said Seguin.  “AFRICOM works with the Guard and our embassies on the continent to respond to requests from countries interested in partnering with a state.  And it’s a true interagency process between our State and Defense departments in how needs are identified and assessed and which State might best meet the needs of that relationship before any partnership is approved. “

EUCOM Deputy Director for Plans, Policy and Strategy, Brig. Gen. Sonny Hurtado, has served 33 years in uniform, 22 of those as a member of the National Guard.  When asked why he joined the Guard, Hurtado spoke of the fundamental connection between citizen and Soldier, where civilian skills meet military contribution, embodied by the National Guard.

“I served for years on active duty, then served as a police officer back in Oklahoma. I felt I could bring my skills as a police officer to serve in the Guard, and I’ve had deployments where I helped teach those skills,” said Hurtado.  “At the end of my career, I want to be able to look back and say that I made a difference.”

In the area on other business, and among the event attendees was Chief Warrant Officer Five Peter Panos, who serves as the Command Chief Warrant Officer of the Army National Guard.  He stressed the importance of having the whole Army – active duty, Reserve and Guard, able to serve and defend the American people.

“While the Guard has an important – and unique – mission in the homeland,” said Panos, “it also supports both the warfight in places like Afghanistan and Iraq, as well as theater security cooperation activities throughout AFRICOM and EUCOM.

“Many Americans may wonder why a State’s Guard might go on a mission to Africa or Europe.  Panos explained, “The active duty force is not as big as it used to be, so we’re really seen as a strategic reserve – coming to the aid of Americans during Hurricane Katrina is an example of that, and so is deploying overseas to areas where our active duty needs to be augmented.

“The active duty personnel rotate, but as members of Guard units sometimes for years, we really bring a long-term commitment to our State Partner Program across Africa and Europe,” said Panos.

“So today I’m really proud that I could join with Guardsmen here at AFRICOM and EUCOM to celebrate our brothers and sisters in uniform,” said Panos,  “and bring awareness of the birth of the militia 380 years ago that eventually became the National Guard in the United States.”

Click here to see more photos of AFRICOM and EUCOM Guardsmen celebrating the 380th birthday of the National Guard.

To learn more about the history of the National Guard, click here.

To learn more about the State Partnership Program, click here.