The State Partnership Program is a key U.S. security cooperation tool that facilitates cooperation across all aspects of international civil-military affairs and encourages people-to-people ties at the state level. 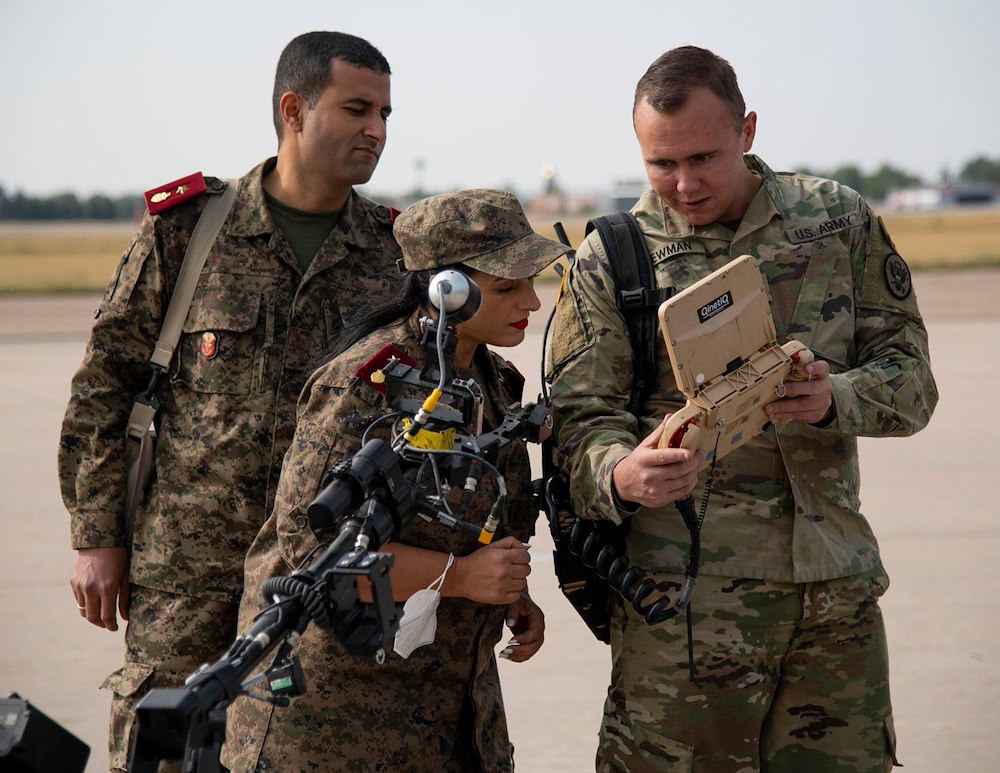 The State Partnership Program (SPP) is a Department of Defense security cooperation program managed by the Chief of National Guard Bureau, executed by geographic commands, and sourced by the 54 U.S. states, territories and the District of Columbia. SPP began in 1993 with the three Baltic Republics and has grown to 82 partnerships; 15 of those partnership are among U.S. states and African nations.

The program directly supports Department of Defense objectives and theater campaign plans by building relationships that enhance global security, understanding and cooperation. The program fosters long-term relationships across all levels of society and encourages the development of economic, political, and military ties between the states and partner nations.

During the past five years the 15 partnerships in Africa averaged 170 events annually in support of security cooperation objectives, involving thousands of partner-nation personnel.

There are currently 15 State Partnerships between the United States and African nations:

The State Partnership Program between North Dakota and Ghana began in 2004. The purpose of the program is to foster mutual interests and establish habitual long-term relationships across all levels of society. The program as a whole encourages the development of economic, political and military ties between the states and partner nations. Over the last ten years, the North Dakota's and Ghana's partnership has grown from military-to-military engagements and missions with members and units of the North Dakota National Guard to now including civilian-to-civilian and business-to-business partnerships.

In February 2014, North Dakota broadened its participation in the SPP by entering into new partnerships with the West African countries Republic of Benin and the Togolese Republic. North Dakota's partnerships with Ghana, Benin and Togo represent the formalization of a regional SPP relationship, which is a cost-effective approach to strengthening the cooperation, communication and interoperability of neighboring countries in a manner that benefits U.S. national interests.

The partnership between Botswana and the North Carolina National Guard began in 2008. Activities between the partners concentrate on special forces development, air and ground force development, emergency management, and peace keeping operations. As the North Carolina National Guard fosters relationships outside of the Ministry of Defense, the state government focuses on reciprocal higher education, agriculture, economic development, and law enforcement with Botswana.

Together, they agreed to build a mutually rewarding relationship of cooperation, which will be founded on the preservation of mutual interests, to share their cultural diversity and strengthen their capabilities by integrating investment in human capital within the exchanges, and to embark upon a lasting relationship between the National Armed Forces of Burkina Faso and the National Guard of the District of Columbia, in the best interests of security and development.

The Kentucky National Guard and Djibouti began State Partnership Program cooperation in 2015, in support of the US AFRICOM Theater Security Cooperation Strategy.

Through cooperative training exercises and key leadership engagements, National Guard and partner-nation service members are learning from each other and forming lasting relationships to enhance each other’s forces for the future. The program increases strength in peacetime, which will improve capabilities and interoperability in times of conflict.

The SPP allows National Guard to partner with allied nations, like Djibouti to strengthen relationships and interoperability, enhance military capabilities, and increase cultural awareness and professional skills among U.S. military personnel and their counterparts.

The program is based on a full-spectrum exchange philosophy partnering service members from every rank with their allied-nation counterpart. For example, a Kentucky Infantry squad will train alongside a military police type unit from Djibouti. With these exchanges, privates, junior NCOs and junior officers gain the opportunity to focus on their skillset. At the same time, our commanding generals and senior enlisted leaders spend time working alongside their counterparts in Djibouti, building the relationship from the bottom to the top.

The partnership is sustained by conducting exchanges focusing on military and civilian best practices in such areas as air and land forces interoperability, disaster management and professional development. On average between 5-10 exchanges take place between the Kentucky National Guard and Djiboutian Armed Forces each year, both in their home country and throughout Kentucky’s commonwealth.

Through the State Partnership Program Liberia and the Michigan National Guard partner nation’s military, security forces, and disaster response organizations in a cooperative, mutually beneficial relationship. Since 2014 Michigan has teamed up with Liberia to strengthen alliances and enhance mutual benefits of increased readiness.

The partnership aims to support Morocco in order to become an exporter of security and stability in North Africa through global combatant command security cooperation objectives.

The relationship between the Vermont National guard and the Republic of Senegal was established in 2008. Senegalese President Wade visited Vermont in 2008, Senegalese President Sall visited in 2014 and President Obama visited Senegal in 2013. Numerous medical, engineer, and aviation exercises have occurred during this partnership.

The New York National Guard and South African forces have engaged in partnership events together since 2003, executing bilateral events to include military and civilian engagements to promote regional stability in Africa.

New York National Guard leadership conducts regular visits to South Africa for discussions with representatives of the South African National Defense Force. Since 2003, the two partners have conducted more than 70 joint training events and exchanges. A significant highlight of the state partnership is the regular participation of the New York Air National Guard in the bi-Annual African Aerospace and Defense Air Show held at Air Force Base Waterkloof, located on the outskirts of Pretoria, South Africa.

Engagement between the two countries is steadily growing. In 2017 the program executed 15 exchanges, conducted 22 in 2018, and 33 are planned for next year. The Wyoming National Guard has worked diligently to increase engagements between Tunisia and other Wyoming state government and civilian agencies.

In 2019 Wyoming hosted the 33rd Joint Military Commission – the first time it was held outside of one of the national capitals – between the US and Tunisia. Among the dignitaries in attendance were the Tunisian Minister of Defense, the US Deputy Assistant Secretary of Defense for African Affairs, US Ambassador to Tunisia and the Tunisian Ambassador to the United States.

The University of Wyoming is developing an extensive engagement strategy with Tunisia, to include student and faculty exchanges and academic programs. It sent its first summer work study student to Tunis this year. That student happens to also be a Wyoming Army National Guard member.

The Nebraska National Guard and Rwanda signed the framework to become the Department of Defense’s 15th state partnership in Africa following a ceremony in Kigali, Rwanda, Dec. 12, 2019.

The partnership will focus on sharing expertise in emergency and disaster response as well as strengthening cooperation in peacekeeping operations and readiness for the Rwanda Defence Force, which contributes more troops each year to United Nations peacekeeping missions than all but a few much larger countries.