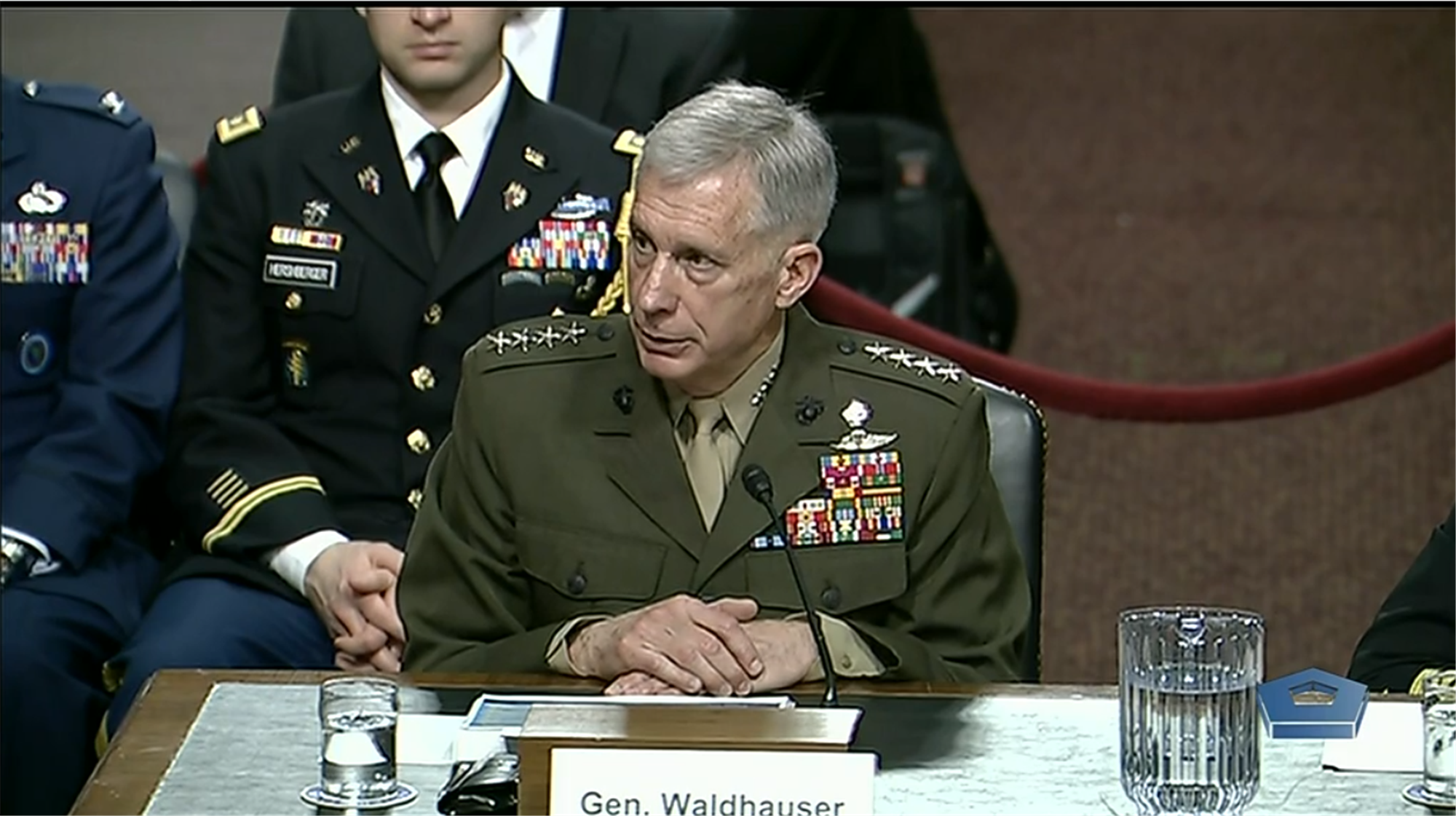 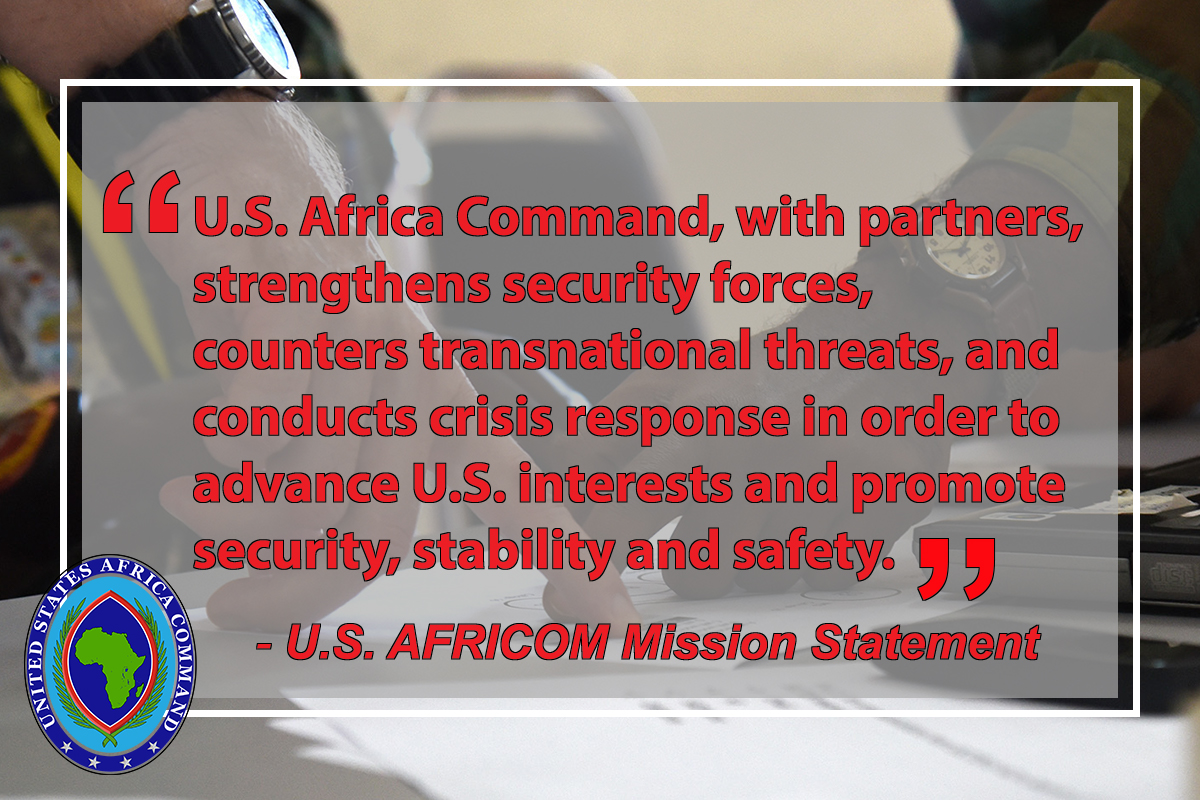 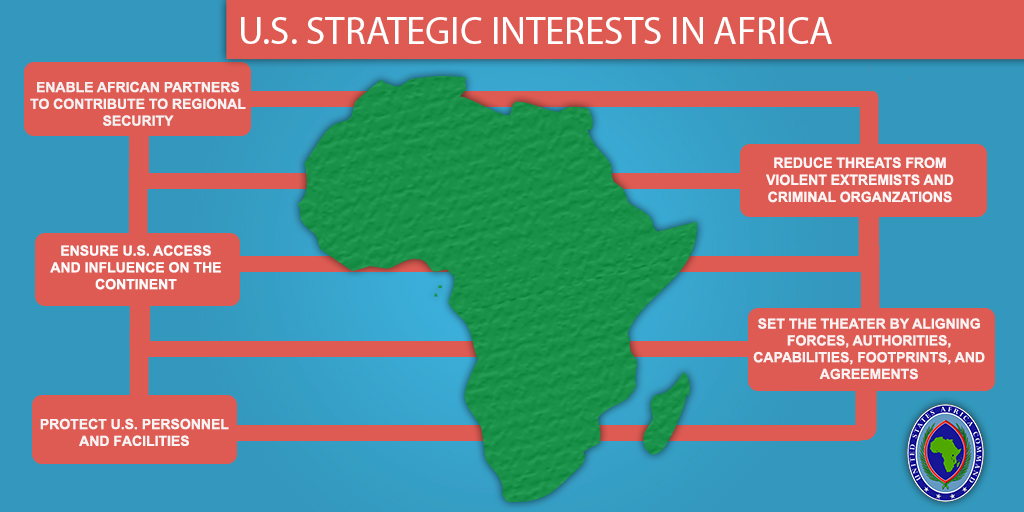 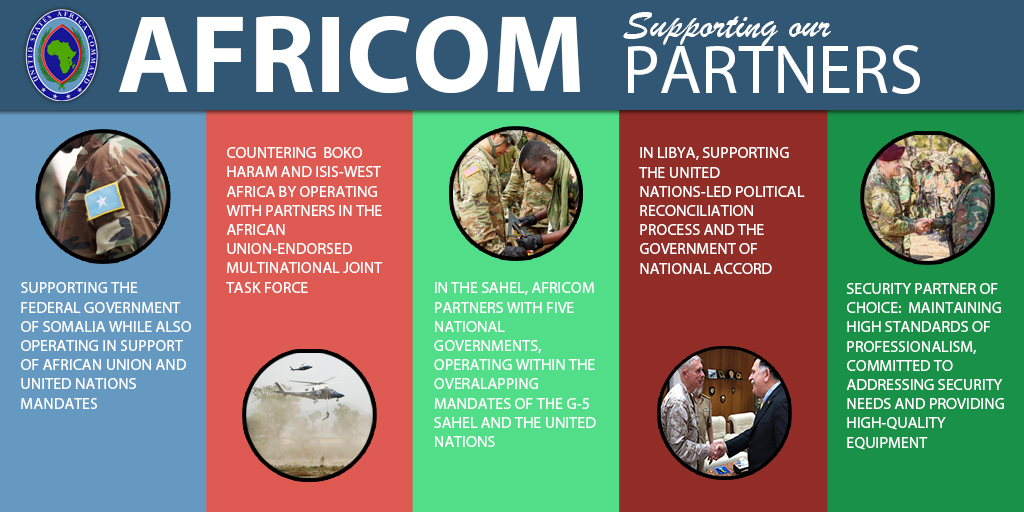 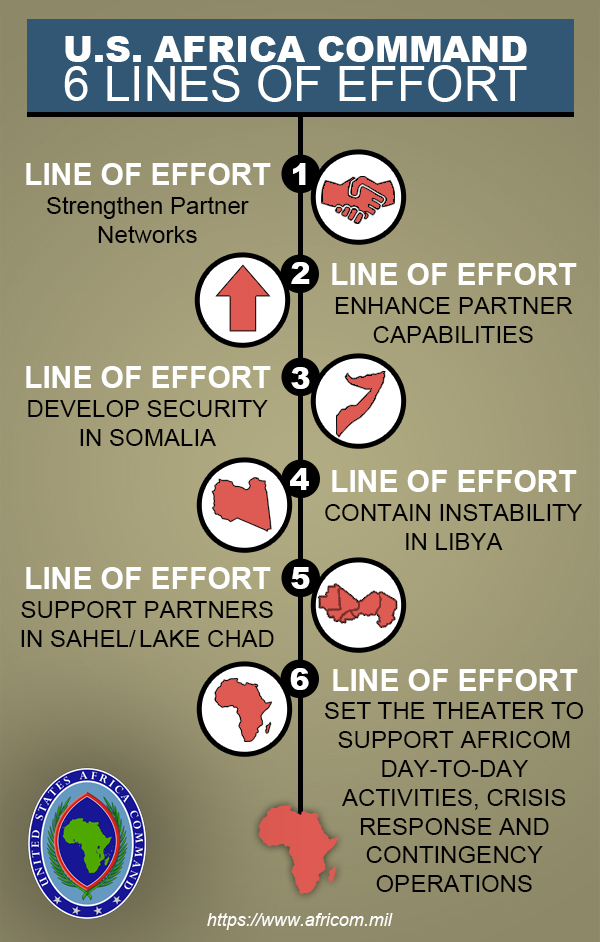 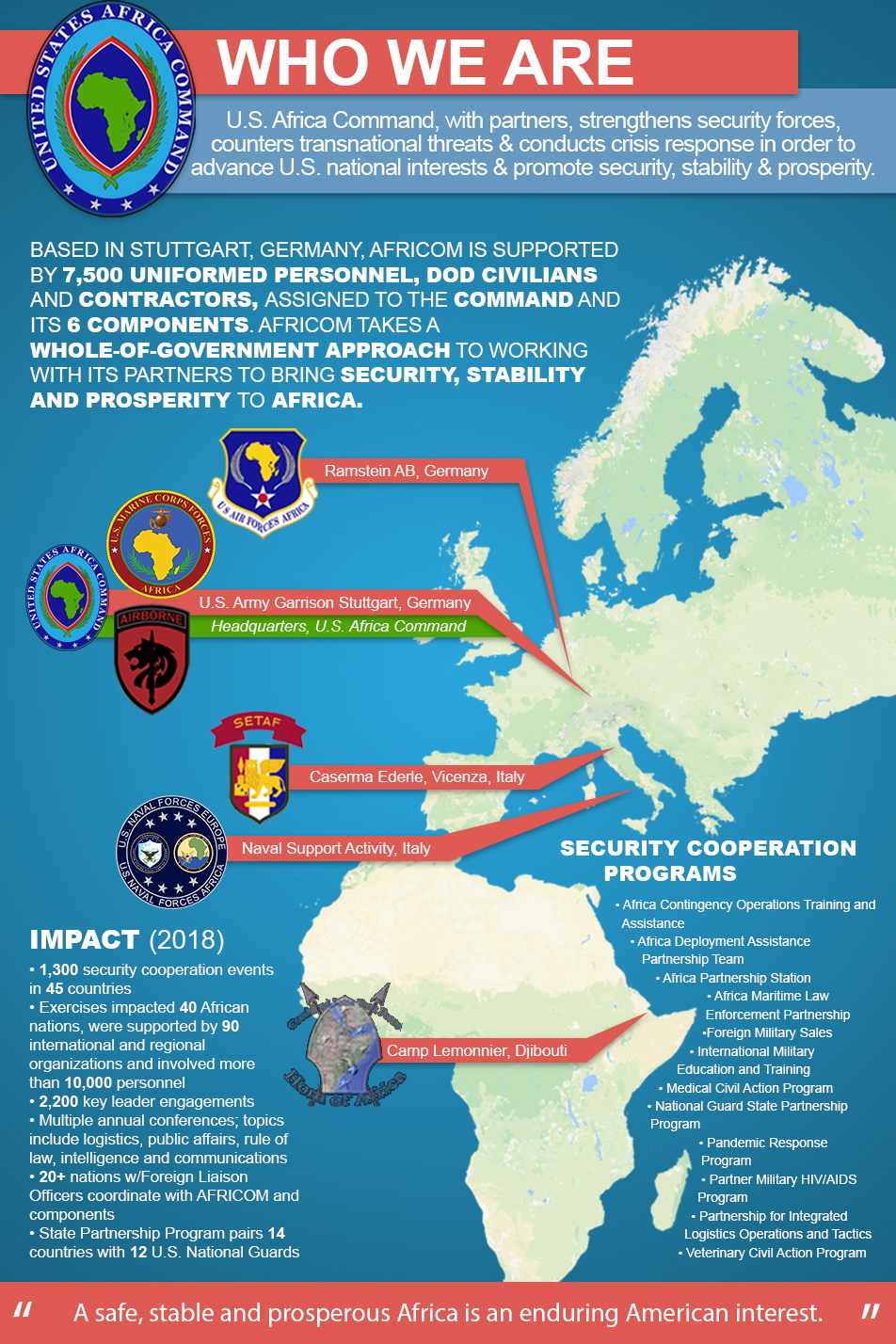 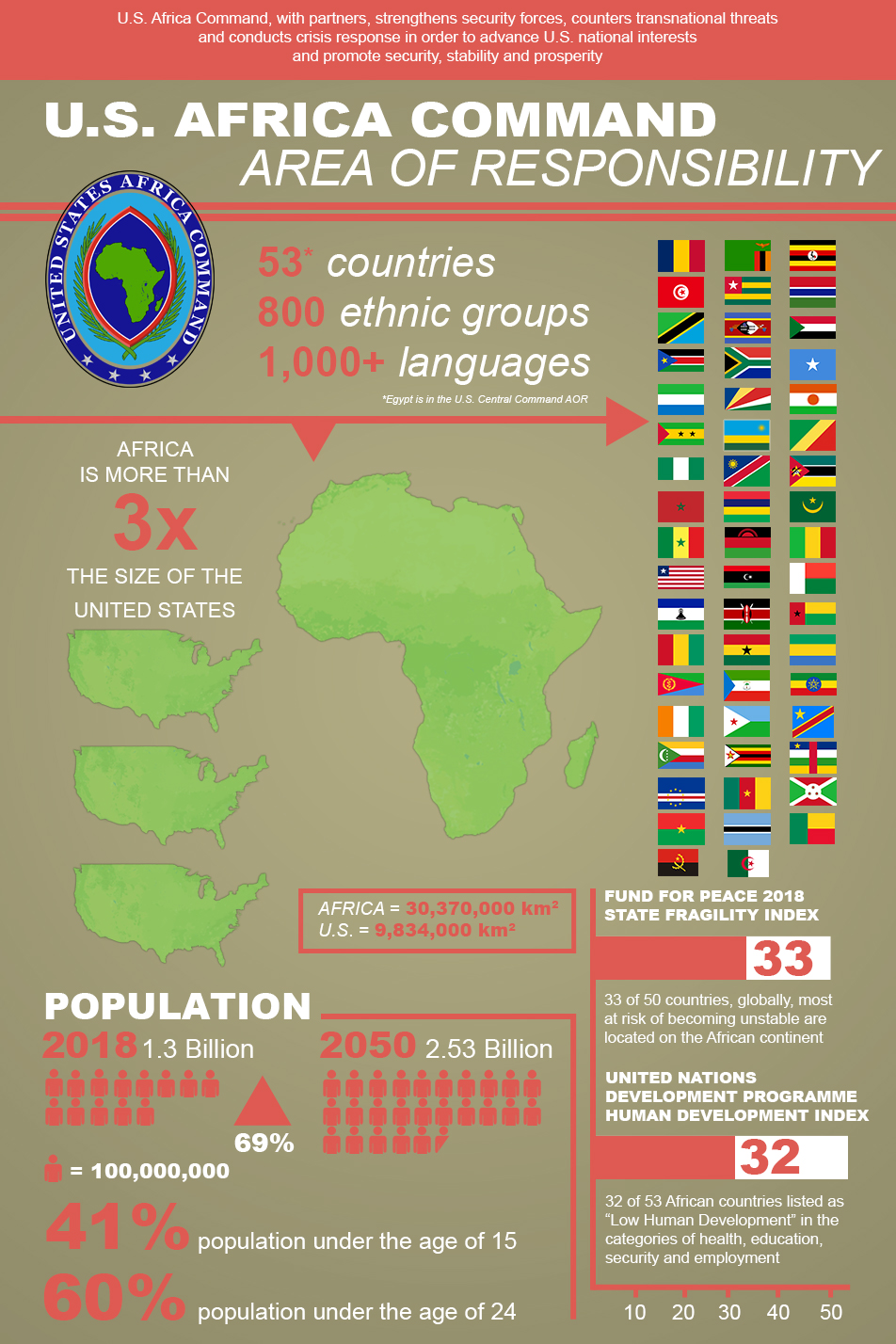 "By employing a partner-centric approach, U.S. Africa Command complies with the specific direction in the National Defense Strategy to 'support relationships to address significant terrorist threats in Africa.'  To address this directive, U.S. Africa Command builds on two strategic principles.  First, very few, if any, of Africa’s challenges can be resolved using only military force.  Consequently, U.S. Africa Command emphasizes military support to diplomacy and development efforts.  Our activities directly complement Department of State and USAID efforts to reduce the spread of harmful ideologies, strengthen governments who protect their citizens and foster security and economic successes."

"The successful advancement of U.S. interests in Africa is best achieved with stable nations on the continent.  Accountable governments, well-trained and disciplined militaries with a respect for the rule of law and human rights, and growing economies are cornerstones to this stability.  Over the past year, consistent with the updated national strategies, U.S. Africa Command revised our strategic approach to effectively strengthen our African partners by evolving our security cooperation from a focus on crisis response to capability and capacity building against our new strategic priorities:  state fragility, increased involvement of China and Russia, VEO expansion, and threats to U.S. access and influence.

"In Africa, VEOs remain a serious threat to the shared interests of our partners, allies, and the U.S. These VEOs and criminal networks prey upon disenfranchised populations, creating a cycle of recruitment and allowing extremist ideology to fester. Extremist networks also exploit criminal networks for the illicit transport of narcotics, weapons, and persons. VEOs cultivate and encourage an environment of distrust, despair, and hopelessness to undermine governments, allowing for the expansion of their radical ideology."

"Somalia remains key to the security environment of East Africa, and its long-term stability is important to advancing U.S. interests in the region.  When assessing Somalia, it is important to understand incremental progress has been made over the last decade as the result of a truly international effort inside the country.   The U.S. works closely with our international partners, which include the United Nations, European Union, African Union, AMISOM and the troop contributing countries, the United Kingdom, Turkey, and others, on security sector development efforts.  Together, we remain committed to Somali-led progress on improving conditions for a well-trained Somali National Security Forces that can assume and sustain security within the country.

The U.S. also continues to target al-Shabaab and ISIS-Somalia.  U.S. military activities in Somalia include remote or accompanied advise and assist missions, the building, training, and equipping of Somali combat units, and when necessary, kinetic action.  The effects of our kinetic activities serve to disperse al-Shabaab and ISIS-Somalia leadership, disrupt how they communicate, and further decentralize how they conduct operations.  Ultimately, our kinetic activities, encouraged and supported by the Federal Government of Somalia, create opportunities for governance to take hold."

"U.S. Africa Command focuses on three objectives for Libya.  First, U.S. Africa Command assists in degrading terrorist groups, such as AQIM and ISIS-Libya, who pose threats to U.S. and Western interests and destabilize Libya and its neighbors.  Second, every effort is made to prevent widespread civil conflict that would threaten security and stability.  Finally, U.S. Africa Command supports the political reconciliation process by providing security to facilitate diplomatic engagements in Libya.

U.S. Africa Command continues to support the U.S. Libya External Office’s diplomatic efforts to promote the United Nations-facilitated Libyan political reconciliation process.  The recent return of a former Ambassador to Libya as the Chargé d’Affaires of the Libya External Office offers a seasoned diplomat, who is familiar with the multi-layered problem set.  The U.S. is now better positioned to manage the diplomatic and counterterrorism strategy.  In 2018, U.S. Africa Command conducted kinetic strikes targeting the leadership and operational commanders of both ISIS-Libya and AQIM providing the opportunity for the Libyan Government of National Accord to continue its efforts to improve security and work towards political reconciliation."

Security in the Sahel

"Within the Sahel region of northern and western Africa, dangerous pockets of extremists control numerous under-governed spaces.  The African-led, French-assisted, and U.S.-supported G5 Sahel Joint Force, comprised of forces from Burkina Faso, Chad, Mali, Mauritania, and Niger, is a successful example of burden sharing.  The U.S. is providing bilateral security assistance for the countries of the G5 Sahel Joint Force, and U.S. Africa Command contributes operational planning support to compliment the funding and operational assistance provided by our European allies to the G5 Sahel Joint Force.  U.S. Africa Command remains committed to assisting the African-led operations to degrade VEOs and to build the defense capabilities within the G5 Sahel Joint Force and, in turn, build the capabilities of individual countries within the joint force."

Security in the Lake Chad Region

"Within the Lake Chad Region, the Multinational Joint Task Force comprises forces from Benin, Cameroon, Chad, Niger, and Nigeria, and remains a strategically significant organization in the efforts to counter Boko Haram and ISIS-West Africa.  Boko Haram and ISIS-West Africa attack military and civilian targets throughout Northeast Nigeria and the Lake Chad Border areas of Niger, Chad and Cameroon, thus dominating large swaths of territory and displacing millions from their homes, contributing to a multi-border displaced persons crisis.  U.S. Africa Command and USAID work with the Multinational Joint Task Force to deliver humanitarian support and facilitate international relief efforts to bring basic health care, clean drinking water, adequate sanitation, and food supplies to the hardest hit areas.  However, the persistent violence and the growing number of displaced persons impact the ability for organizations to deliver the required assistance."

Security in the Gulf of Guinea

"In the Gulf of Guinea, maritime security remains crackdown a strategic priority due to its role in global oil markets, trade routes, and the residence of approximately 75,000 U.S. citizens.  Piracy and other illicit maritime activities threaten development efforts, weaken state security, and rob states of precious resources required for greater economic growth and effective governance.  In 2018, piracy incidents trended lower as cooperation increased among the Gulf of Guinea partners.

Support to the U.S. State Department During Crisis

"An enduring mission of the command is to support the Department of State-led mission to protect U.S. personnel and facilities on the continent.  We maintain defense cooperation agreements with several African nations allowing for forward staging locations to enable more efficient recovery and evacuation.  As such, we maintain enduring locations and contingency locations throughout Africa, which provide a flexible and diverse posture for operational needs and the protection of U.S. personnel and facilities."