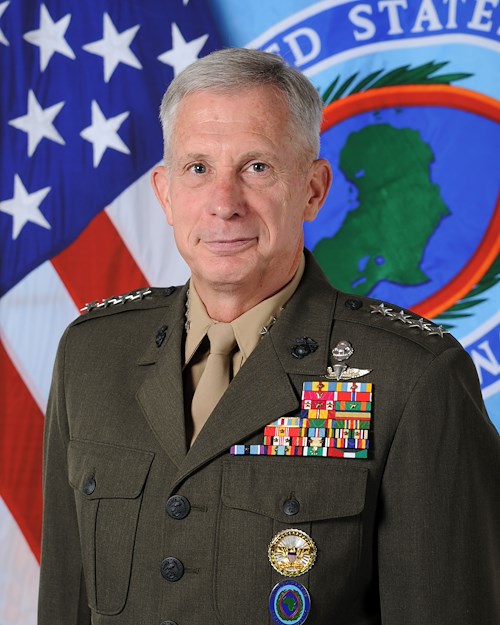 Waldhauser was born in South St. Paul, Minnesota, and is a graduate of Bemidji State University. He was commissioned in 1976 as an infantry officer. His company grade assignments included platoon and company commander billets with both the 1st and 2nd Marine Divisions; Commanding Officer of the Marine Detachment aboard the USS Long Beach (CGN-9); and staff of the Commander of Amphibious Squadron Seven.

As a field grade officer Waldhauser was a Battalion Landing Team Operations Officer and served on the faculty of the Amphibious Warfare School. During the Amphibious Warfare School tour, he deployed to the staff of the Commander, U.S. Marine Corps Central Command (Forward) during Operation Desert Shield/Desert Storm. General Waldhauser also served on the II Marine Expeditionary Force staff and was the Battalion Landing Team Commander of 3rd Battalion, 2nd Marine Regiment. He also had duty at Headquarters, U.S. Marine Corps, and the Pentagon with the Joint Staff Combating Terrorism Directorate (J-34).

Appointed to the rank of Brigadier General in 2003, his initial assignments as a General Officer were Commanding General, Marine Corps Warfighting Laboratory, and Deputy Commander, Marine Corps Combat Development Command. From 2006-2007, he served as Chief of Staff, U.S. Special Operations Command, in Tampa, Florida.

As a Major General, he commanded the First Marine Division from September 2007 until July 2009.