Flintlock is a Special Operations Command Africa led all-domain exercise focused on the G5 Sahel Force and their interoperability with U.S. and NATO special operations forces to counter malign influence, aggression, and activity. 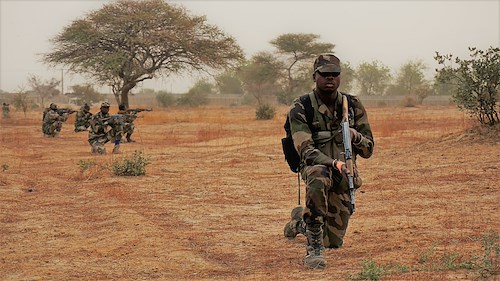 The 2020 iteration of Flintlock was hosted by Mauritania with one outstation in Senegal, reflecting a positive and broader commitment by African partners to help solve African problems. The exercise was designed to strengthen the ability of key partner nations in the region to counter violent extremist organizations, protect their borders, and provide security for their people.

At the operational level, a multinational staff headquartered in Atar, Mauritania, tested and strengthened their ability to collectively address regional security challenges through a comprehensive scenario involving command and control of exercise participants working at the various outstations.

Exercises like Flintlock help strengthen the defense capabilities of African governments and regional organizations to address security threats more effectively – ultimately opening economic investment and trade opportunities and reducing threats to citizens and interests of allies and the United States abroad and at home.