Initially created in 2013 by U.S. Africa Command, this unit is tasked with establishing coordination between the African Union Mission in Somalia and U.S. forces in the country. 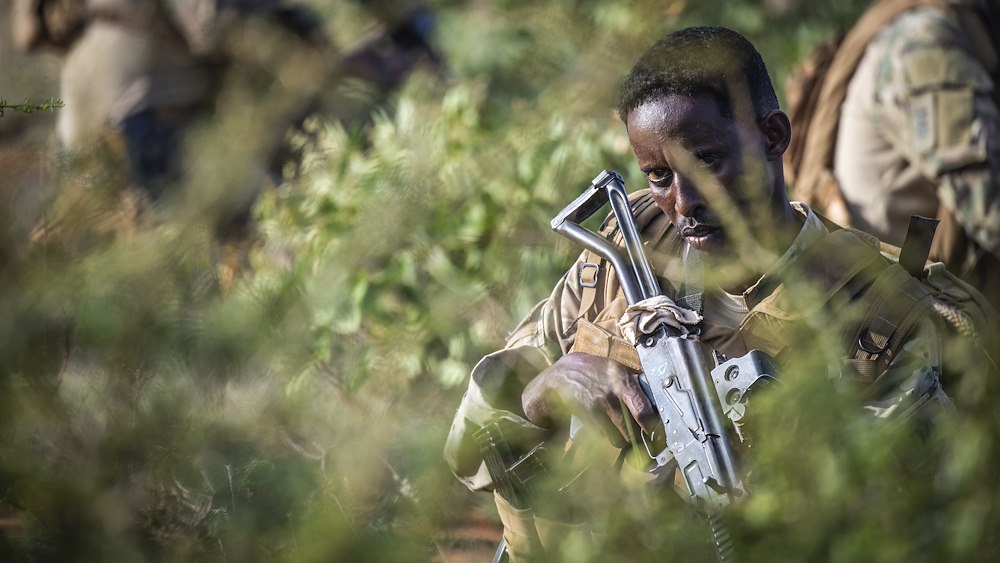 A Somali Soldier assigned to the 3rd DANAB maintains a watchful eye during a short security halt a on patrol near the town of Wanla Weyn, Somalia, July 22, 2019. The DANAB are a highly trained Somali National Army infantry commando force, named after the Somali word for lightning.

Initially created in 2013 by U.S. Africa Command (AFRICOM) as a three-person unit tasked with establishing coordination between the African Union Mission in Somalia (AMISOM) and U.S. forces in the country, the MCC saw its mission expand following 2017’s London Conference on Somalia when then-U.S. Secretary of Defense James Mattis agreed that the U.S. would lead the Comprehensive Approach to Security Strand 2A (CAS 2A).

The Comprehensive Approach to Security is a framework for international commitments under five areas of work: enabling effective AMISOM operations and a transition to Somali-led security; developing Somali national security institutions; supporting the Somali government’s stabilization plans and community recovery/state authority; countering and preventing violent extremism; and enhancing international partners’ support. Strand 2A specifically refers to the Federal Government of Somalia's Ministry of Defense and the Somali National Armed Forces.

“The MCC works for the U.S. Ambassador [to Somalia] in building the Somali National Army," said U.S. Army Col. Eric Hefner, MCC director (as of September 2020). "[The Ambassador] is the internationally agreed co-chair of the CAS 2A process.

As of September 2020 the MCC includes the Military Assistance Group – Somalia (MAG-S), Office of Security Cooperation (OSC), and two British officers seconded from Operation Tangham, the U.K. mission in Somalia.

“MAG-S is the piece that reports directly to Joint Special Operations Task Force – Somalia (JSOTF-SOM)," said U.S. Navy Lt. Cmdr. Jason Looper, MCC plans officer (as of September 2020). "The capacity and institutional building piece, for which the OSC and our two U.K. officers play a major role, is vital to the future of Somalia transition.”

As of now the British officers, both lieutenant colonels, serve as ground combat planners to provide the MCC with a capability that it otherwise would not have.

As the MCC grew from three personnel to approximately 20, Combined Joint Task Force – Horn of Africa (CJTF-HOA) has become the major force provider in support of the positions that were not included in the original AFRICOM execute order establishing the cell. The increased number of personnel has proven critical in maintaining the relationships and responsibilities that the MCC has taken-on, and has enhanced AFRICOM’s desired effects in Somalia while providing support to AMISOM, the SNA, and the multitude of international partners operating in the East African nation.

Joseph Truesdale, a Navy reservist lead at MAG-S (as of September 2020), noted that the international community in Somalia functions as a quasi-coalition, albeit one without many of the formalized arrangements familiar in other military theaters.

That lack of a formal coalition is what makes the working environment “interesting and challenging,” according to Looper. “Everyone comes together and coordinates their respective efforts in order to advance Somalia toward sustained security."

While there is no set agreement to aid one another, the various international forces work toward a common goal and support one another when planning conflicts arise.

“When our planning sessions identify critical needs, many international partners deliver specific equipment and training programs to fill those needs,” Looper said. “Being able to create consensus on priorities for stabilization and have international partners step up to execute different parts of that plan in concert is critical to success in Somalia.”

“Effective coordination is essential for Somalia to achieve its strategic reform objectives while also fighting in the field against al-Shabaab,” said Truesdale, adding that the MCC works in conjunction with the various international partners to coordinate closely with senior personnel from the SNA Forces and senior federal security officials.

Hefner described the European Union (EU) contribution as vital in Somalia because the EU funds AMISOM, which, in turn, provides combat power in support of the Federal Government of Somalia. AMISOM is “a capable and competent force that makes a significant difference in holding al-Shabaab and other anti-Federal Government of Somalia elements at bay.”

“Drawing from troop contributing countries across East and Central Africa, AMISOM soldiers are motivated to serve on behalf of the Somali people, their own nations, and the international community,” Truesdale said.

The Turkish intergovernmental task force based at Camp TURKSOM provides significant funding and training, and the European Training Mission – Somalia (EUTM-S) is a valuable partner because it provides much of the training capacity in the international community and has the combat power to assist the SNA. Hefner also cited the “special relationship” between the U.S. and the U.K., saying that he works very closely with the commander of the U.K. contingent, sharing information and ideas.

“Most important is the collaboration and cooperation of the different elements here to assist the SNA. We all have our own caveats and missions, but everyone works hard to synchronize those efforts because we all see that is the best way to get the most from our efforts,” Hefner said. He added that the international partners are not looking for assistance from the U.S., but coordination.

MAG-S coordinates operations and activities with the SNA’s chief of defense force and AMISOM forces as part of developing the SNA’s capability to conduct combined operations. Coordinating and mentoring the SNA Reform Process in support of the U.S. Embassy links the SNA Forces, the Somali General Staff, and the Ministry of Defense together, which strengthens civilian oversight of the military, establishes systems of accountability, and furthers professionalizing the SNA Forces.

“From close interactions with its leaders, I greatly admire the Danab’s active operations against our common adversary, al-Shabaab, as well as its ability to address essential non-operational efforts, such as building organizational capacity.” said Truesdale, noting that many Danab officers are younger than their U.S. counterparts and Somali officers “bear complex leadership responsibilities not often expected of Western officers at the earliest stages of their military careers.

“Their personal stories of courage and commitment are especially striking considering Somalia’s difficult operation conditions and its uncertain future.”

"We appreciate the advice, assistance, and training provided by U.S. partner forces to professionalize the Danab light infantry brigade, as well as the broader Somali armed forces," said 1st Lt. Mohamud, a Danab officer who works regularly with MAG-S. "We share a common goal to fight violent extremist organizations in Somalia and East Africa to bring security and safety for our citizens."

“There are no out-of-the-box solutions," Looper said. "Progress is happening, but because we are building their foundation, not just improving what exists, we must have strategic patience in understanding the pace of that progress.”

“I have been privileged to lead a constantly changing team of professionals who apply their own intellect, experience, and work to advancing our mission of ‘build the SNA,’" Hefner said. "This team has enabled the SNA to develop in its ability to ‘organize, train, man, and equip the SNA force.”