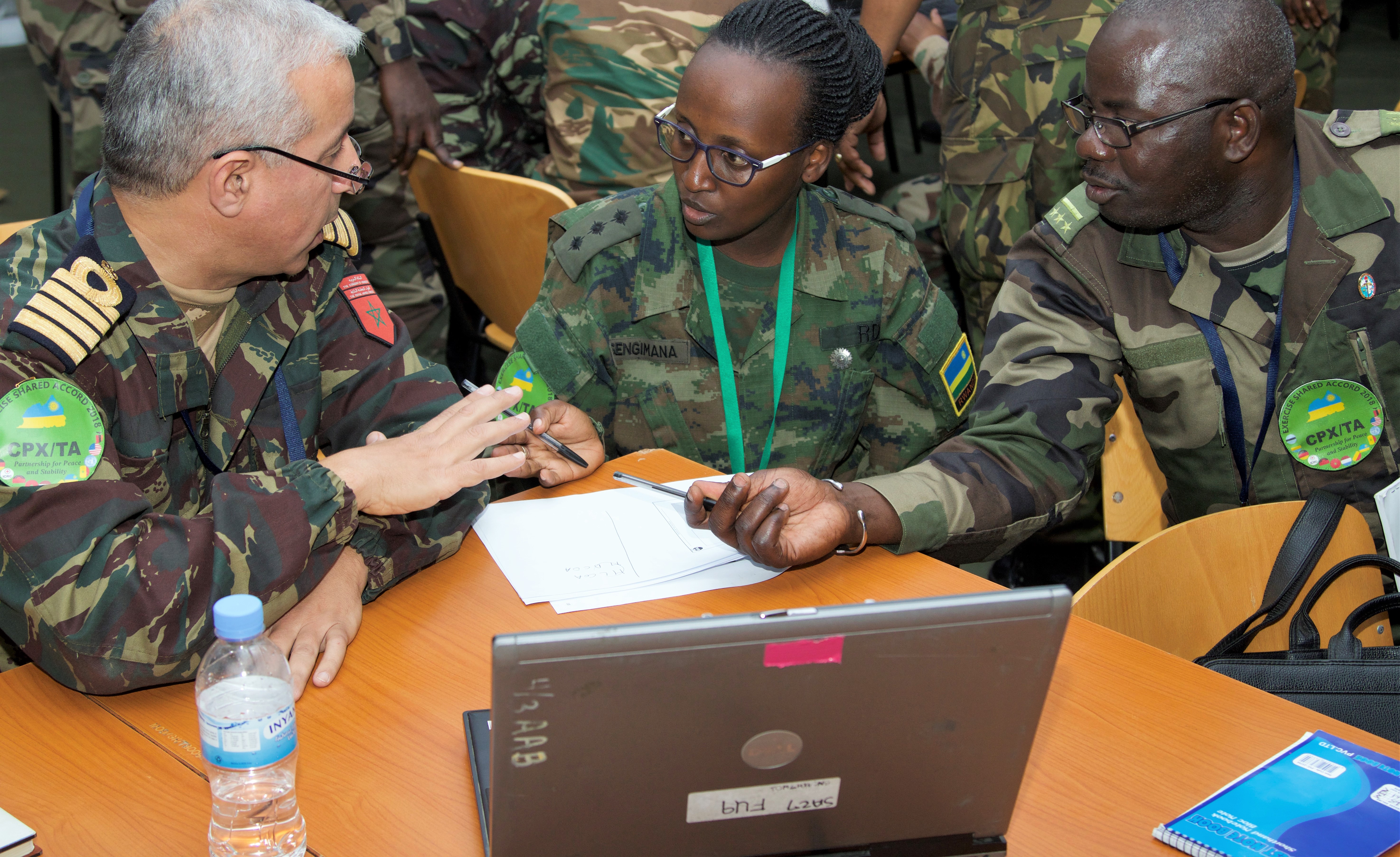 “One of the measurements of success for peacekeepers lies with the effective protection of civilians,” U.S. Army Lt. Col. Marci T. Hodge, a peace operations analyst specializing in women, peace and security with the Peacekeeping and Stability Operations Institute, told the training audience during exercise Shared Accord 2018 in Rwanda. “Research has found that when women are more involved in the peace process the agreement is 35 percent more likely to endure for at least 15 years. So, women are essential to peace and security.”

During U.S. Army Africa’s Accord Series exercises in 2018, African partners, the U.S. and European allies ensured its training included discussions on the importance of professional militaries respecting the rule of law and human rights, on responding to allegations of abuse, and on the importance of female peacekeepers.

“The U.N. Women, Peace and Security report mentioned that women and girls are valuable targets, because they are often seen as the vectors of cultural identity,” said Capt. Lausanne Nsengimana, a Rwandan Defence Force officer who deployed with the first rotation of peacekeepers to the Central African Republic in 2014 with the United Nations Multidimensional Integrated Stabilization Mission in the Central African Republic (MINUSCA). “That is why warfare tactics such as rape, forced abortion, trafficking, sexual slavery and the threat of sexually transmitted disease are part of contemporary conflicts. Female military members are value-added in conflicts where gender-segregated culture remains strong, where women’s voices go unheard, or women’s security issues are not being taken in consideration during operations.”

If a woman is raped, she will more likely approach a woman in uniform rather than a man. Men are also more likely to approach a woman in uniform if they have been raped, added Nsengimana, a graduate of the U.S. Command and General Staff College at Fort Leavenworth, Kansas. Women peacekeepers play an increasingly prominent role and are crucial in improving the performance of U.N. operations.

USARAF’s four Accord Series exercises each build relevant training scenarios based on a U.N. mission for participants from troop-contributing nations attending the exercises. Shared Accord, the final exercise in the 2018 series, is being held at the Rwanda Military Academy and is focusing on preparing soldiers and police from 15 African nations for MINUSCA.

Lt. Col. Abraham Biwot, a U.N. member states support team peacekeeping training officer agreed one of the keys to the success of this initiative is to increase women peacekeepers.

“The yardstick for the measurement of success for MINUSCA lies with effective protection of civilians,” said Biwot, an officer in the Kenya Defence Forces. “Effective protection of civilians begins with peacekeepers recognizing the critical role women play in peacekeeping. This arises out of the fact that women and children suffer the most during conflict because of their gender roles and fewer resources to defend themselves.”

Biwot added that including both female soldiers and police officers in the MINUSCA mission strengthens the protection efforts of male peacekeepers, raises awareness of women’s issues, acts as a deterrent of sexual exploitation and abuse, and improves operational effectiveness.

“Incorporating women in peacekeeping and peace building ensures issues pertaining to them and the vulnerable are factored in for sustainable peace,” Biwot said.

Jean-Pierre Lacroix, the U.N. undersecretary general for peacekeeping operations, acknowledged the dual challenges of sexual exploitation and abuse and added the Action for Peacekeeping (A4P) initiative seeks to spell out new peacekeeping challenges for member states and galvanize their support to include the increase of female peacekeepers and police on the ground.

“First of all, we need to make sure that every allegation will be brought to our knowledge so that we can act upon them,” said Lacroix. “And I think that we also need to do more in addressing the needs of victims. We have a victims-centered approach. We have victim advocates in our biggest missions, who are basically tasked with supporting victims and helping them. And we also need to make sure that this greater reactivity of troop- and police-contributing countries will be sustained and even enhanced. So, there is progress. It’s unquestionable; but at the same time, we need to do much more."