AFRICOM’s Multinational Cooperation Center and Strategic Outreach Division, hosts migration forum to educate elements of the command on irregular migration concerns throughout Africa and across the Mediterranean Sea.

It's important for all partners to work together to find effective and efficient solutions to migration challenges.
By U.S. Army Staff Sgt. Grady Jones ,  U.S. Africa Command Public Affairs Apr 10, 2017 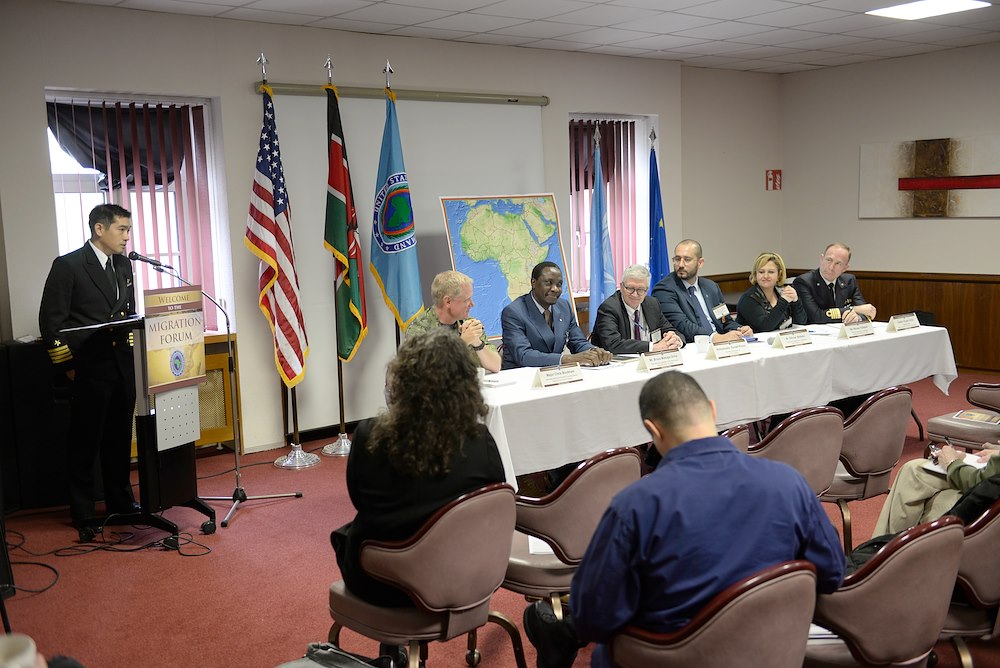 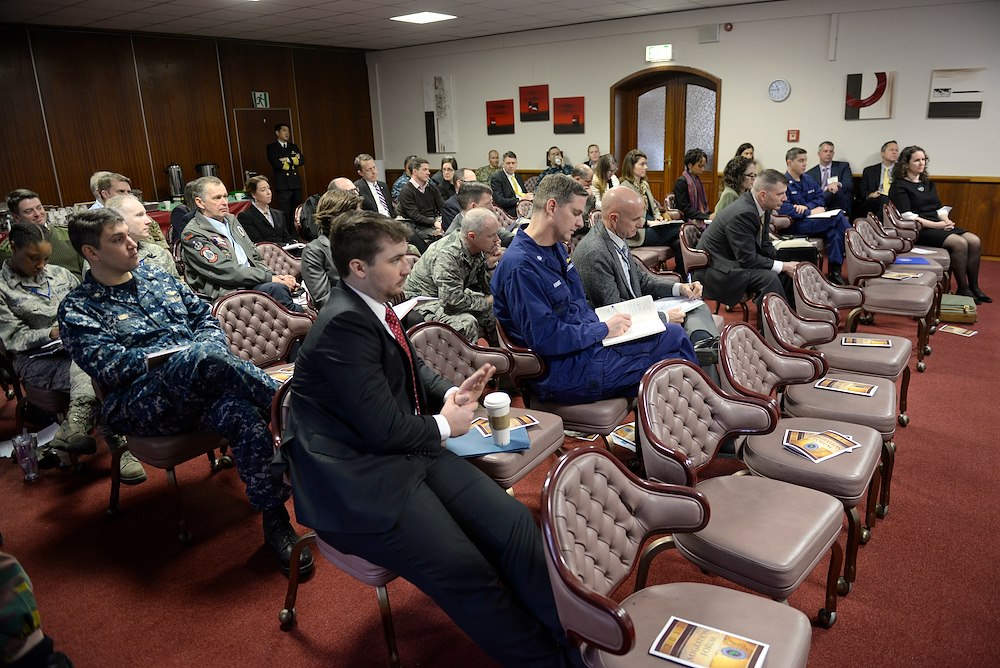 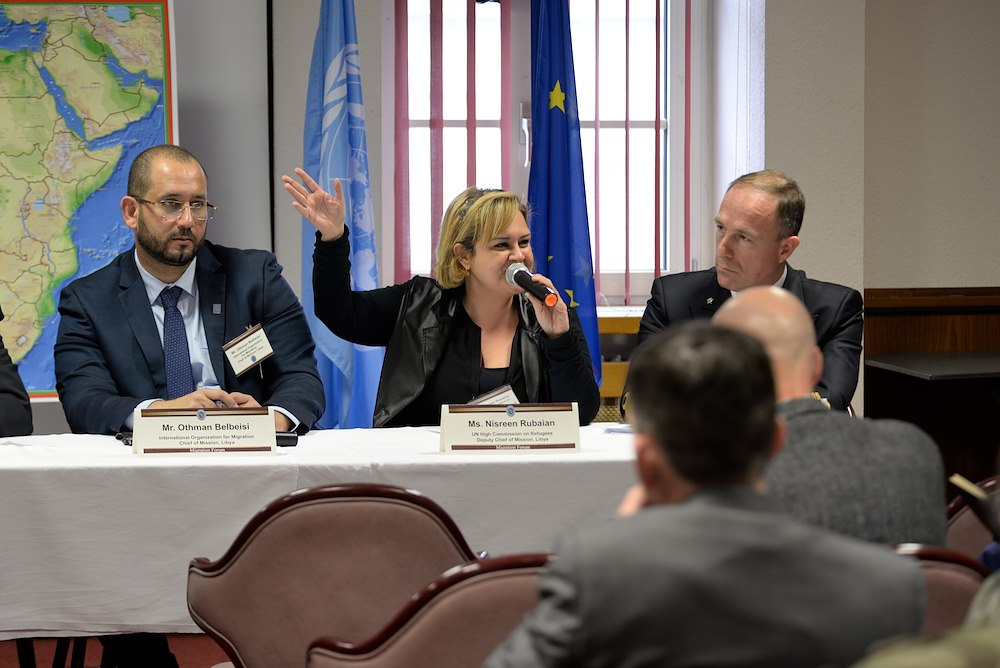 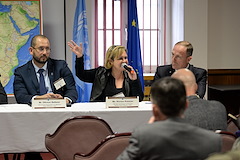 AFRICOM’s Multinational Cooperation Center and Strategic Outreach Division/ J51, which is part of the AFRICOM Directorate of Strategy, Plans, and Programs/ J5, convened this event to educate elements of the command on irregular migration concerns across the African continent, from origin to destination countries.

“The purpose of the forum was to let the command have a better idea of how migration works both at the policy level but also at the practical, on the ground level,” said Amb. Donald Koran, vice director, AFRICOM J5.

The plight of the migrants and what they go through something that needs to be understood better, according to Capt. Mark Ascuncion, director, AFRICOM J51.

“Sometimes you miss the human factor, what they go through or what human rights issues they will face,” said Asuncion.

The U.S. State Department has the lead on refugee and migration policy for the U.S. government. State's Bureau of Population, Refugees and Migration spent one quarter of its budget in Africa (in 2016, $776 million).

Several panel sessions were held to explain the challenges and concerns surrounding migration in Africa.

Americans have a different perspective of migration than Europeans, due to geography, said Koran.

“In the U.S. we think about migration, both legal and illegal from Latin America and the Caribbean,” said Koran. “In Europe the focus is much more on migration from the Middle East and Africa."

Migration through Libya, across the Mediterranean, and into Europe is an important point of discussion, he said.

“There is almost 1.3 million people in need in Libya as a result of the Libyan crisis,” said Nisreen Rubaian, senior protection officer and deputy chief of mission, UNHCR Libya Office. “Refugees and asylum seekers are facing increasing challenges to cope with the situation.”

Migrants are having issues getting access to public services such as health and education making them more vulnerable, Rubaian said.

Understanding the challenges that migrants face will help AFRICOM leadership in making sound decisions in handling migrant issues, according to Asuncion.

Another topic of the discussion included illicit smuggling networks, and regional implications.

“Part of that is understanding that migration causes certain security concerns,” said Asuncion.

If those security concerns aren’t understood and addressed correctly, diplomacy, defense, and development, will be difficult to sustain, according to Asuncion.

“Migration is not a bad thing but it should be done in a legal and orderly fashion,” said Koran. “We need to provide information to (migrants) to help them make their decisions.”

Key information to understand includes factors driving migration and how it’s conducted both through the desert and across the Mediterranean, said Koran.

“One of the topics that came up in the session was the root causes of migration, both economic migration and refugee flows,” said Koran. “In the end, the ultimate goal is to address those drivers of migration.”

It’s important for all partners to work together to find effective and efficient solutions to migration challenges, according to Canadian Army Maj. Chris Buckham, IPSTC, Nairobi, Kenya. .

“Migration is a fundamental symptom of ongoing challenges within the African continent, both Saharan and sub-Saharan,” said Buckham.“The big thing is making sure that people know what resources are out there."

There is the challenge of duplication of effort, inefficacies of allocation of resources, and also the development of programs that may not facilitate solutions in Africa, said Buckham.

“They are solutions that are developed from the context or paradigm of the West and may not be applicable in an African Context,” said Buckham. “We want to bring resources to the table, making sure those resources go where they need to go.”

“AFRICOM is part of the Department of Defense, and with the ‘3-D’ construct of diplomacy, defense, development," said Asuncion. "AFRICOM is always in support of the State Department and USAID for anything we do on the (African) continent.”

U.S. Africa Command continues its mission of working towards a prosperous, stable, and secure Africa, a national interest.