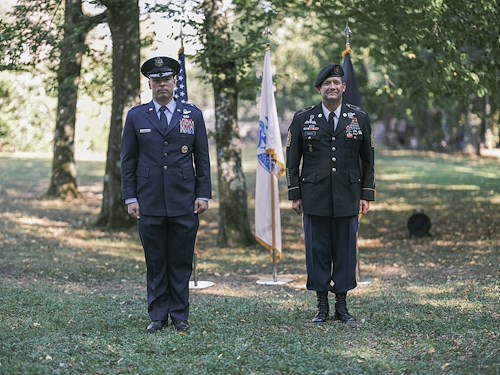 Stuttgart, Germany – It isn't uncommon for people to spend 20 years in the U.S. military and retire, having done what they set out to do. Twenty years is a long time, but it's not long enough for some. Command Sgt. Maj. Lyle H. Marsh, senior enlisted leader of Special Operations Command Africa, retired in a ceremony on Kelly Barracks, Stuttgart, Germany, Aug. 21, after spending 35 years in the U.S. Army.

Marsh, born in the Adirondack Mountains of northern New York, entered the U.S. Army on Aug. 14, 1985. He served in the 3rd Infantry Division and 10th Mountain Division. In his words, early in his career, he didn’t always live up to his potential.

"I actually was a poor soldier," Marsh said. "I've often wanted to go find my first company commander because he would be blown away that I am where I am. He didn't think I would make it through my first enlistment, though it was only a two-year enlistment. Those first two years I had two company grade article 15s. I made it because people have invested in me."

Marsh credited his first squad leader in his first unit in Germany with pulling him through.

"I was really not a good soldier in everyone's eyes but one guy, Robert Randolph, my squad leader. That guy continued to show me the good in me. I can still show you the first counseling statement from him. Three quarters of it is the positive side. Only a quarter of it is 'hey, would you stay out of the beer garden?'"

Marsh said his string of positive leadership continued when he arrived at his first ODA.

"That team was one of the best teams they could possible be and they lived it night and day," Marsh said. "It was really a product of (Team leader, Master Sgt.) Andy Marshall. He had the deep warrior spirit and you couldn't help it, if you're in the room with him, the warrior spirit is contagious. More contagious than COVID. That team was undoubtedly the best team, for a period of time, in 5th group, and if you don't believe me, they are, in fact, the horse soldiers."

Marsh is familiar with the mystique around the horse soldiers in the Special Operations community, but said he has never seen the movie or read the books.

"I don't know which one he was in the movie," Marsh said. "My wife asks me about books and movies and I tell her maybe someday when I'm retired and have some distance I'll look at those things but I know too much about too many people and I don't want to call them a liar."

Marsh spent nearly 23 combined years with 5th SFG(A) serving in a wide variety of positions. Assignments to Special Forces units typically feature constant deployments, and Marsh's decades in the community were no exception. He pointed out that while he faced challenges in his career, his wife, Jesse Marsh, ultimately enabled him to do so.

"My calling has put a tax on our family," Marsh said. "I can't tell you how many times I deployed to Iraq or Afghanistan after (we were married.) If you think she hasn't executed the same level of service and sacrifice that I have, you don't know our story. We both carried heavy loads, we just carried different loads."

In addition to his time as a Green Beret, Marsh counted his Ranger tab as something to be proud of in his career.

"I didn't want to get to the end of my career and regret not having done it," Marsh said.

He was injured to the point he could barely walk during the course and had to get surgery during a break. A week later, he went back to Fort Benning and finished ranger school. He attributed this resolve to his mother, who raised him as a single mom with 3 kids in the 1960s.

Accordingly, he came to SOCAFRICA, his final assignment, off of a deployment with Special Operations Joint Task Force - Afghanistan. Marsh arrived two weeks after a battle with an al-Qaeda affiliate left four special operators dead in Niger.

"I don't like to talk about Tongo Tongo because we as a command have learned the lessons, we've invested in those lessons," Marsh said. "We moved forward."

"We don't talk about that as much now because a lot of that is behind us," Maj. Gen. Dagvin Anderson, commander of Special Operations Command Africa said during a change of responsibility ceremony earlier that day. "The reason a lot of it is behind us is because of the work Hank Marsh has done. He was absolutely critical in making sure we found what needed to be changed and changed it. He did it because lives were on the line and lives were lost because of that incident."

"Working here has been truly satisfying," Marsh said. "After 35 years working in the military, I've come to see that this organization operates in a time of adversity and challenge better than I think any organization I've ever been in. With limited resources, we continue to get after our nation's top-tier targets. That's impressive considering the small amount of resources we use."

Marsh closed out by thanking his fellow SOCAFRICA members.

"I will always include myself in the SOCAFRICA family," he said. "If you cut me right now, I would bleed red and black, because my love for this organization runs clear through me."