Six Ethiopian air force officers visited with servicemembers to discuss airdrop procedures, February 8 to 12, 2010. <br /> <br />The visit was part of a continuing engagement between Ethiopian officers and aircrew from the 449th Air Expeditionary

The visit was part of a continuing engagement between Ethiopian officers and aircrew from the 449th Air Expeditionary Group (AEG) and the 81st Expeditionary Rescue Squadron. The previous meeting, held in Ethiopia in December 2009, was a step towards Theater Security Cooperation by U.S. Africa Command (AFRICOM), 17th Air Force and Combined Joint Task Force - Horn of Africa.

Theater Security Cooperation is an effort spearheaded by U.S. Africa Command designed to initiate activities to strengthen the capacities of African militaries. These activities include military to military engagements, as well as other events involving U.S. government agencies -- including Department of State and the U.S. Agency for International Development.

"Our continuing dialogue on airdrop capabilities should lead to enhanced capability with the Ethiopian Air Force in the future and thereby enhance security throughout the region," said Colonel Jon Ullmann, 449th AEG commander. "This is the first time Air Force Africa has hosted a Theater Security Cooperation event with support from Camp Lemonnier and CJTF-HOA and it allows us the opportunity to engage with the Ethiopians."

Airdrop is a critical asset to regional security. CJTF-HOA maintains qualified aircrew members as part of its personnel recovery mission, and for additional missions such as humanitarian assistance if tasked. Personnel and a variety of essential supplies can be airdropped from HC-130P aircraft here depending upon mission needs.

These briefings culminated with two flights demonstrating airdrop procedures. The Ethiopian officers observed the importance of proper airdrop calculations and procedures, and a healthy respect for safety precautions.

"The flight was very exciting and very interesting," said Ethiopian Air Force Lieutenant Colonel Bogale Gebreyese, Air Transport wing commander. "What we have learned in the class, we were able to observe in the air."

In addition to airdrop procedures, the Ethiopian officers were given a CJTF-HOA mission brief, toured a C-130J, and visited with Camp Lemonnier personnel.

"The reason we came here was not only to learn about the C-130 airdrops, we have learned a lot of things about how to organize a base, how to conduct briefings, how they fly and how they make contact between crews," said Ethiopian Air Force Captain Biruskseifu Senbeto. (U S. Air Force Major Paul D. Baldwin contributed to this article)
U.S. Africa Command, international partners unite in support of autonomous solar-powered aircraft
African Lion 2022 begins in Morocco, Tunisia, Senegal and Ghana
U.S. Africa Command, Morocco strengthen ties in WPS health synch
Port operations move equipment, supplies in preparation of African Lion
Somali, U.S. forces engage insurgents in support of the Federal Government of Somalia 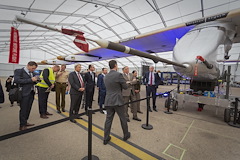