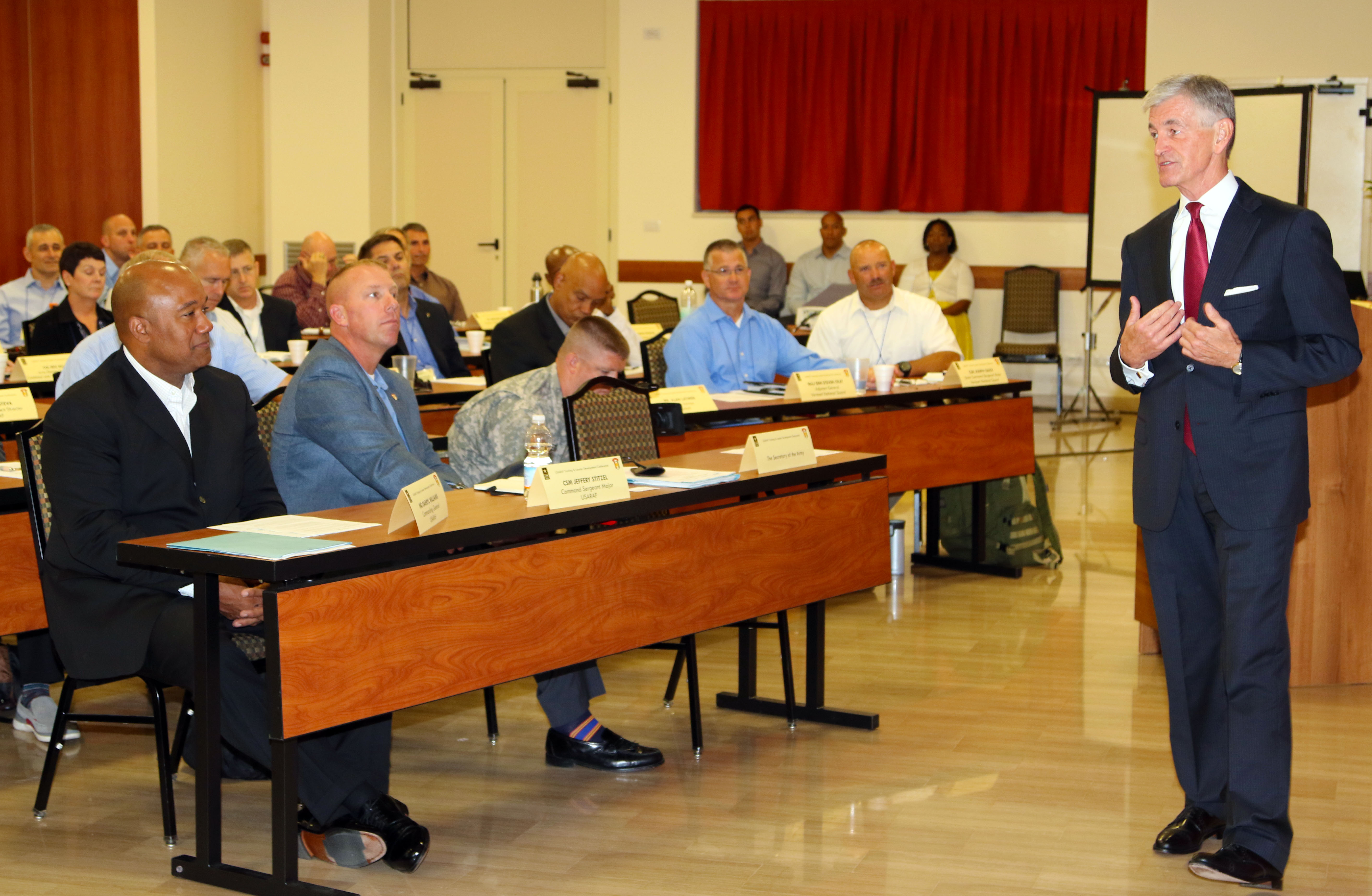 1 photo: Senior leaders build foundation for African Horizons
Sgt. Lance Pounds
Photo 1 of 1: The Secretary of the Army, the Honorable John M. McHugh, addresses participants of a U.S. Army Africa Training and Leader Development Conference, in the Golden Lion Conference Center Aug. 17 at Vicenza, Italy. The conference is designed to help the USARAF team understand the Army Chief of Staff's guidance on Army training and leader development in order to apply that guidance to the USARAF training and leader development program. Some of the other topics discussed during this conference include Regionally Aligned Force lessons learned, RAF readiness, training on the continent, and State Partnership Program lessons learned. (U.S. Army Africa photo by Sgt. Lance Pounds) Download full-resolution version

VICENZA, Italy (Aug. 26, 2015) -- Have you ever caught yourself daydreaming about the perfect home? You picture how big the yard has to be, one story or two, should you add a bedroom for guests or not, size of garage, and type of pool you want. The list goes on and on. These thoughts keep you motivated to someday have the perfect home.

Over time, thoughts turn into plans, then actions. Eventually you break ground and lay the foundation for your dream house. Along the way, there might be setbacks or struggles, but the final outcome keeps you motivated.

The same could be said for U.S. Army Africa, or USARAF. However, it's not a daydream, it's a goal. The list could consist of what an operation has to be, the number or level of partnerships required, should it add this element or that, number of personnel, and type of missions needed. Again, the list goes on and on. As an example, this list depicts the things that assist the USARAF team to achieve its desired goal, to assist their African partner nations to achieve peace, security and stability.

Maj. Gen. Darryl A. Williams, USARAF commander, hosted a training and leader development conference, or TLDC, and a senior leader strategy and orientation session, or SLSOS, in the Golden Lion conference center, Aug. 17-20. The two events brought together active, guard, Reserve and Army civilians, who have cultural and subject matter expertise on the continent of Africa.

"Africa is a challenging place today and one that, if left unattended, is likely to be the birthplace of many more challenges in the future. That's why it's so important that U.S. Army Africa, working alongside AFRICOM, is here and doing important work," McHugh said.

In the analogy of building a dream house, this gathering of senior leaders would be comparable to pitching your plans to skilled master builders. The USARF conference featured a variety of ideas intended to turn dreams into reality.

Through the help of the master builders, blueprints create a visual plan for dream house. In this case, the blueprints are in the form of a strategy, called African Horizons.

African Horizons is USARAF's plan. It articulates the framework of the African Horizons construct, establishes objectives supporting USAFRICOM's goals and describes responsibilities as a theater Army. The plan aids in prioritizing efforts, requesting and applying Army resources, directing specific activities in support of USAFRICOM and improving upon core functions.

Once blueprints have been created, it is time to source the work force. The conference, similar to a convention of master craftsmen, served as a place for the USARAF team to learn from and make connections with those who can help achieve its goals.

The TLDC was designed to help the USARAF team understand Army chief of staff's guidance on Army training and leader development to apply that guidance to their program. Other topics discussed during the conference included regionally-aligned force, or RAF, lessons learned, RAF readiness, training on the continent, and the National Guard's State Partnership Program, or SPP, and lessons learned.

Support from RAF and the SPP is similar to that of hiring specialized contractors to complete portions of your dream house.

RAF assets serve as the boots-on-the-ground element - strategically-selected units aligning their capabilities with African nation partners in efforts to learn and grow from one another.

"We show them ways to achieve success," said Command Sgt. Maj. Terry Weiss, command sgt. maj. of the current RAF asset, 3rd Brigade, 1st Armored Division. He added the development of a noncommissioned officer corps was one of those ways to success.

When constructing your dream house, more than one specialist is required. Plumbers, electricians, painters and drywall workers are employed for their various special skills. USARAF planners also take advantage of specialists.

The SPP is a joint Department of Defense program, which aligns state National Guard units with African nation partners in a long-term relationship, according to the National Guard website. Through the program, military-to-military events are conducted to support defense security goals. It also leverages capabilities to facilitate broader interagency engagements spanning military, government, economic and social spheres.

"Not only do our Guardsmen get their own training but they also provide help to a nation that they may not ever travel to," said Maj. Gen. Steven Cray, Vermont National Guard adjutant general.

Many Soldiers and Airmen rarely go outside of United States except for occasional deployments, and even fewer have been in Africa, Cray said.

"They see it as a real honor to represent the National Guard and their service in a foreign nation," Cray said.

During a panel discussion, Cray shared that there are countries in Africa that are proficient in military skills sets such as peacekeeping operations.

For instance, the Vermont National Guard has been in partnership with Senegal since 2008. Cray said the Senegalese taught Guardsmen how to organize, train and equip Soldiers for United Nations peacekeeping missions.

"It's very applicable for what we do," Cray said. "We take those lessons learned and we make our force better."

Cray also said both parties gain more than training when working together.

"It is not just about training; it is about people and those connections and relationships," he said.

Question and answer segments followed each speaker's brief, which opened the floor for a fluid exchange of ideas.

One topic was balancing the right alignment of RAF assets to mission objectives.

"It is all about aligning like units to deter the threat," said Weiss as he explained how aligning units with similar needs or objectives could prove more effective.

In terms of constructing the perfect dream house, alignment is a must. Even the slightest miscalculation could compromise the stability of the whole house.

Now that the plans have been made, contractors hired, and building has commenced, the next step is to supervise the moving pieces to ensure they remain moving in the same direction.

Following the two-day conference was a two-day SLSOS, where key leaders and subject matter experts from USAFRICOM shared their knowledge and experiences. The roles of these experts are similar to construction foremen who ensure that building schedules are met.

The session was designed to help the USARAF team share ideas and experience, as well as an opportunity to get the latest information from USAFRICOM and European partners. The session offered a venue for fresh perspectives as new personnel and spouses were introduced. Topics discussed during the session included security cooperation, role of and responsibilities of an Army Service Component Command, and briefings from various USAFRICOM components.

Many of the topics discussed during the session were geared towards the future - the how to's of implementing the African Horizons strategy as described in the 2015 USARAF Campaign Support Plan, or CSP.

"In an area of operation as large and diverse as Africa, this requires USARAF to plan, support and conduct operations ranging from the protection of U.S. embassies to training African militaries, and enabling both ally and partner operations," Williams said.

The CSP serves as a guide for the USARAF team to set conditions needed to achieve its goals, assisting their African partner nations in achieving peace, security and stability, throughout the next five years.

This plan follows suit with the African Horizons key concept "Building Partnerships Over Time and Across Echelons." What this means is U.S. forces, such as USAFRICOM, USARAF, RAF, Army Reserve and the National Guard, collectively work together to build long-term relationships with partner nations on the continent.

The key concept, though relatively new, pulls in practices already in use.

"It's total force integration," Burton said. "Any engagement we can have with building the capacity of our partners can help us prevent problems before they happen."

Burton attributes the success of the program to trust building and relationship building.

"The people on the continent know us by name, they are comfortable with us, and when problems occur they have someone they can communicate with," Burton said.

Proper planning, coordination and partnerships over time can bring this daydream to reality.