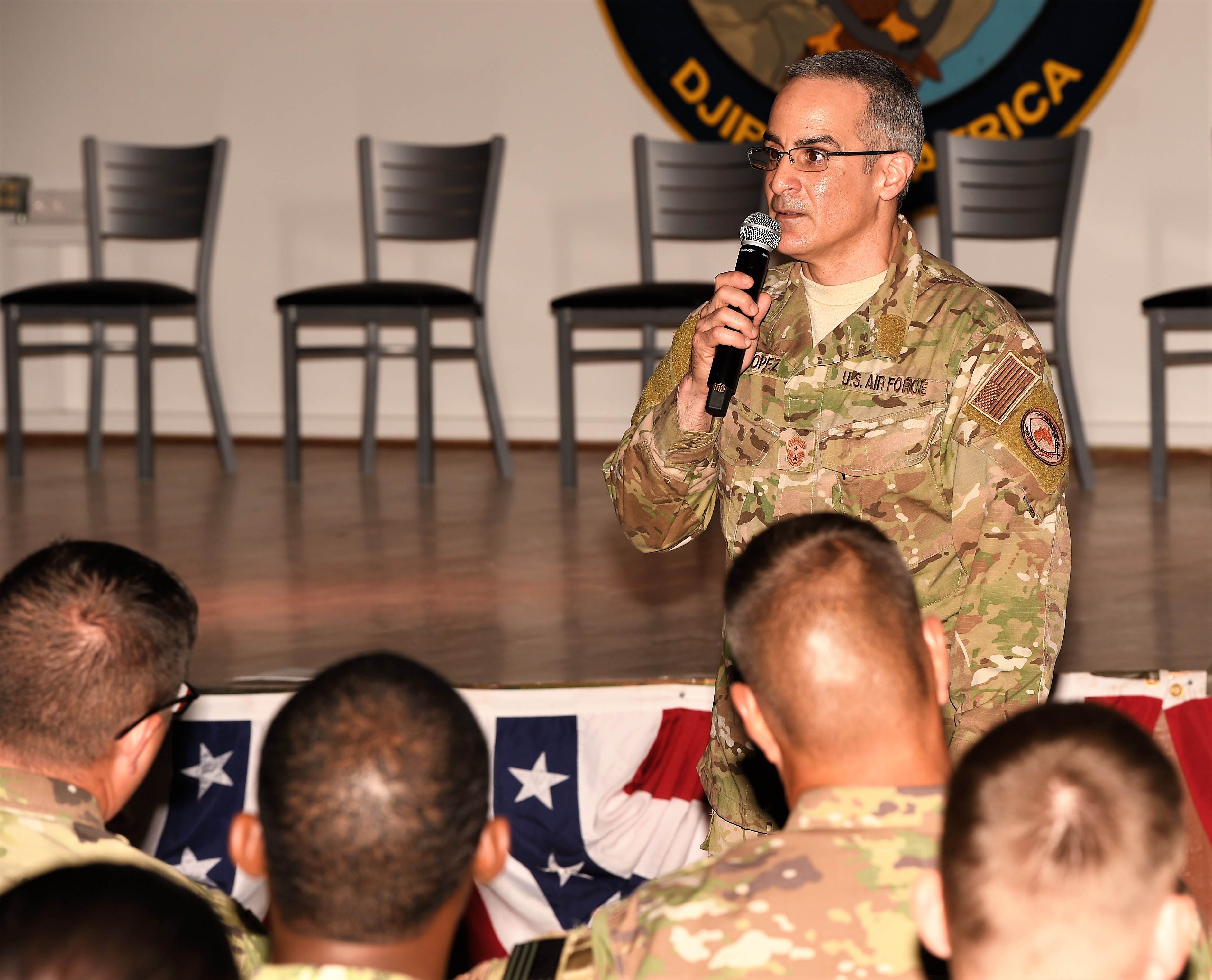 “We are operating in a very complex environment here in Africa,” said Colon-Lopez. “And we can’t confuse this with the [U.S Central Command area of responsibility]. When you compare the two AORs, there are similarities, but the problem here is far more complicated for a couple of different reasons.”

Colon-Lopez continued by explaining that discussions are taking place regarding how to balance resources between commands. He described the complexities involved in the African dynamic and how it pertains to U.S. security, interests and operations.

Renowned for what he calls carnivore leadership, the AFRICOM CSEL took the opportunity to inspire Soldiers, Sailors, Airmen and Marines to continue to hone their skills as they tackle their very important mission in east Africa.

“He is 100 percent aligned with professional development and empowering the enlisted,” said CJTF-HOA Command Senior Enlisted Leader Command Master Chief Geoffrey P. Steffee. “And this is not just our services, but also the 54 countries in [our area of responsibility]. He’s made that one of his primary efforts – he’s an advocate of the enlisted force at the four-star level.”

Before opening the floor to questions, Colon-Lopez stated that for the U.S. mission in Africa to be successful, total readiness of the force is paramount. The Air Force pararescuemen also assured the camouflage-clad audience that they are imperative in inhibiting the escalation of violent forces in the region.

“What we do today matters because it is building block for what we do in the future,” he said. “So, the one thing I ask from you is to pay close attention to the strategic picture of this AOR and carry out your duties in an effective, efficient, loyal and dedicated matter – there’s no other choice.

“You are making a difference, whether or not you see it now. Years down the road, you’re going to look back and say, ‘You know what? I was there when this started.’ You may not be able to see it finish, but you can tell everyone you know that your fingerprints are here.”

CJTF-HOA has been operating in the region since 2002. With a sustained presence of allocated U.S. forces, its posture is critical in the mission of promoting regional stability, security and prosperity for its partner nations.