The top U.S. commander in Africa met with Tunisian defense leaders in Tunis May 16 to discuss security concerns in the region and opportunities for strengthening partnerships. 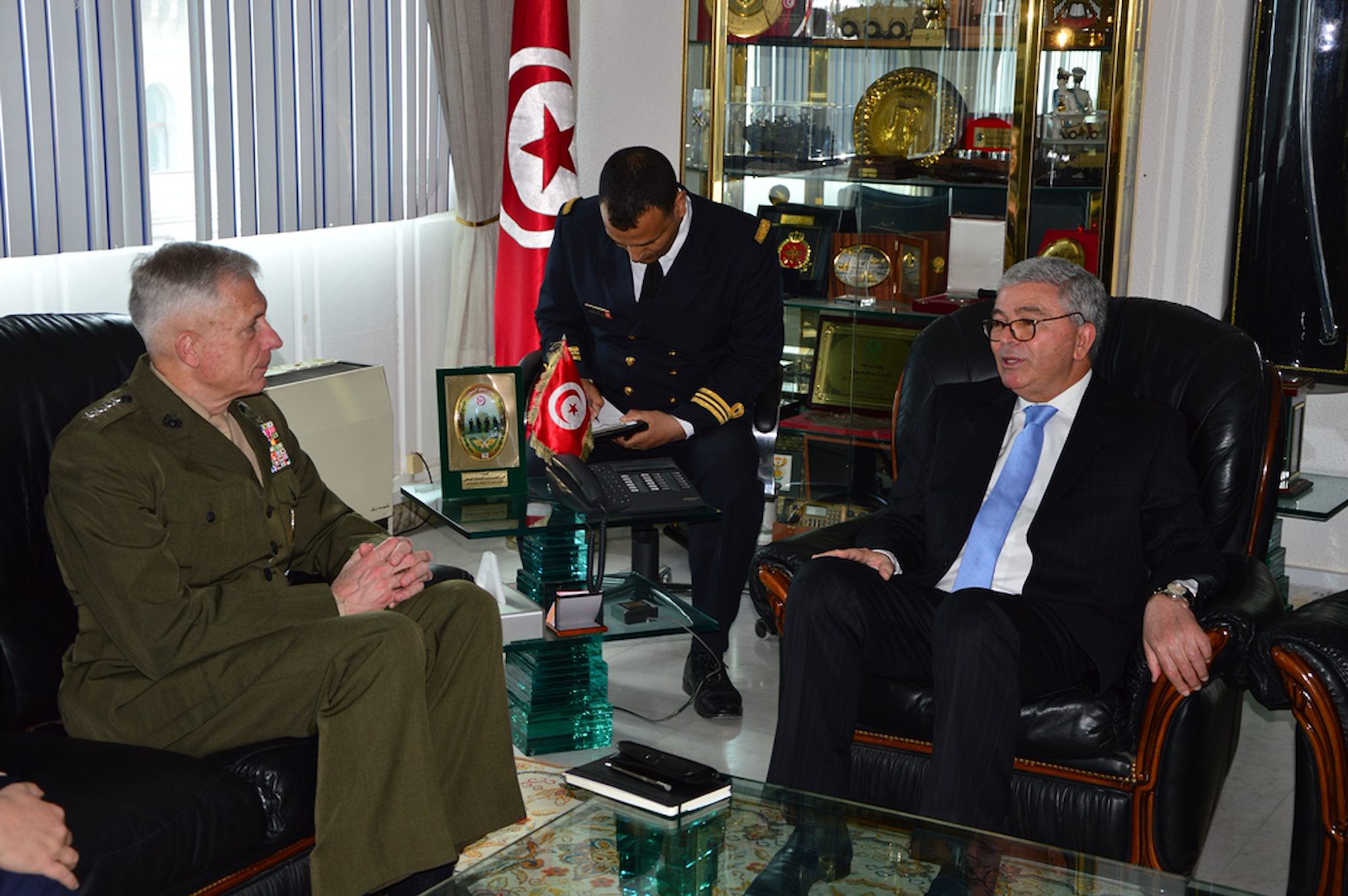 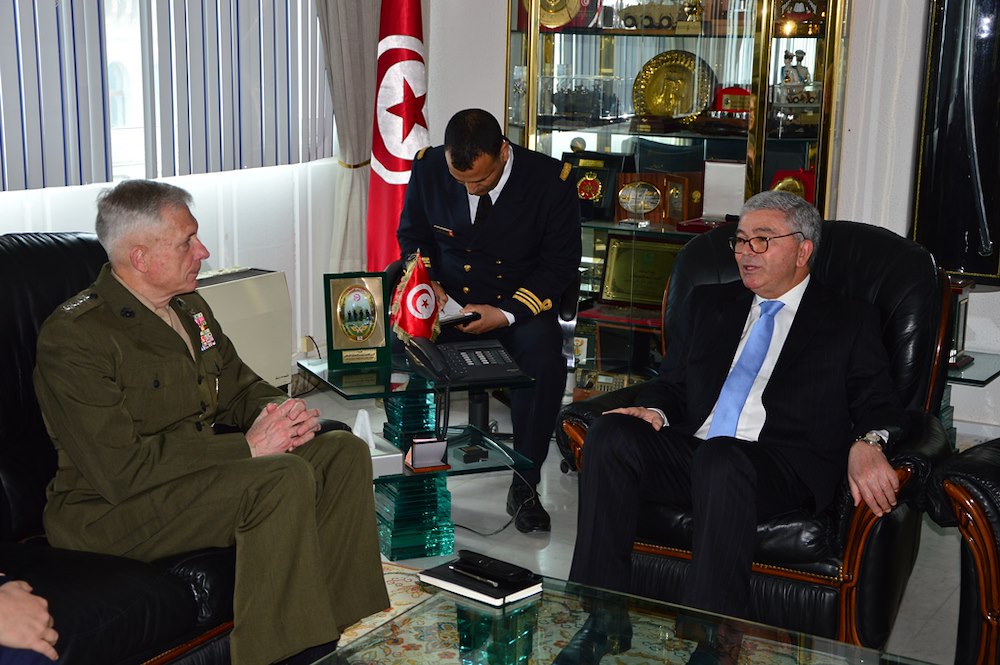 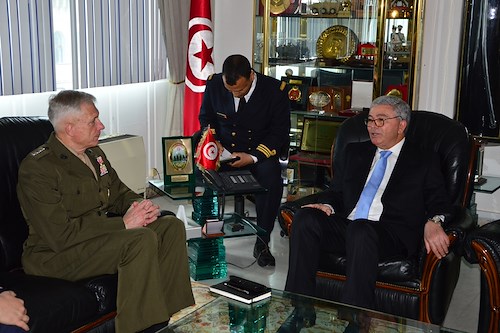 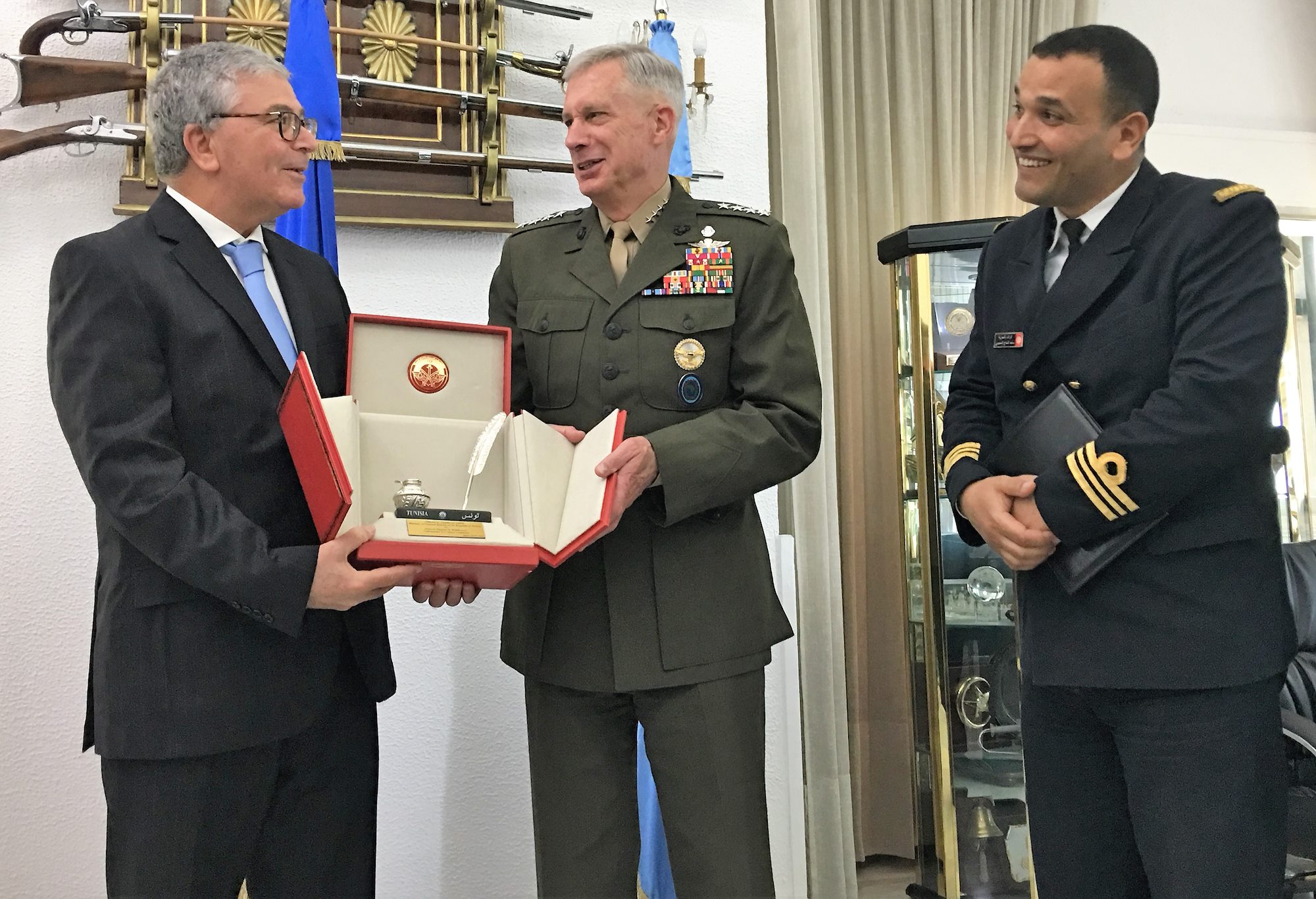 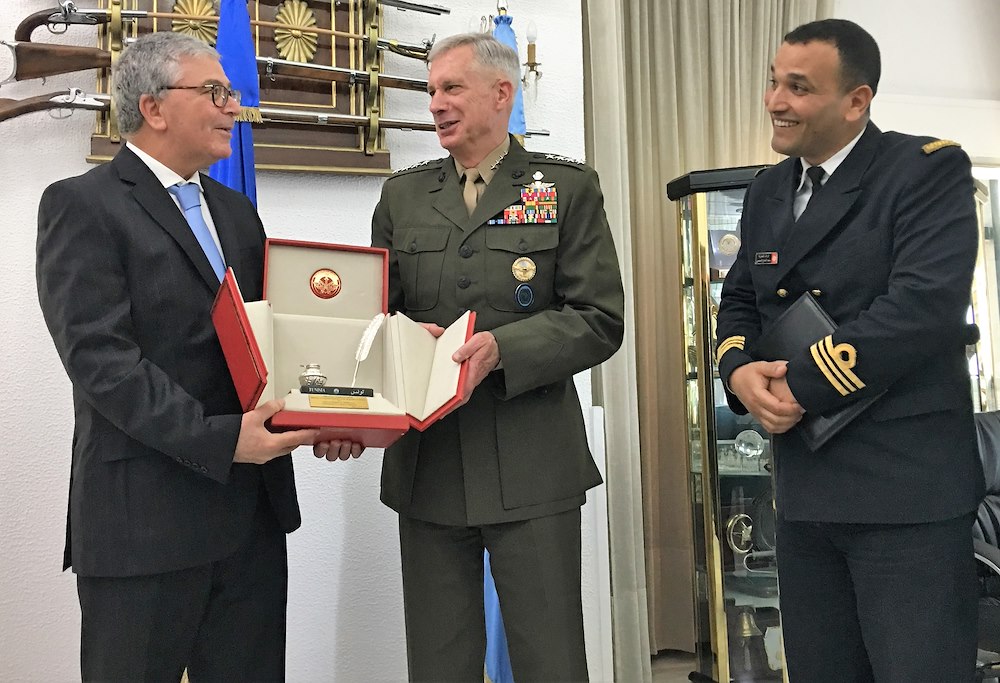 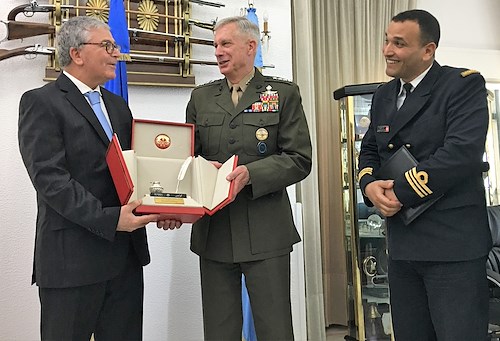 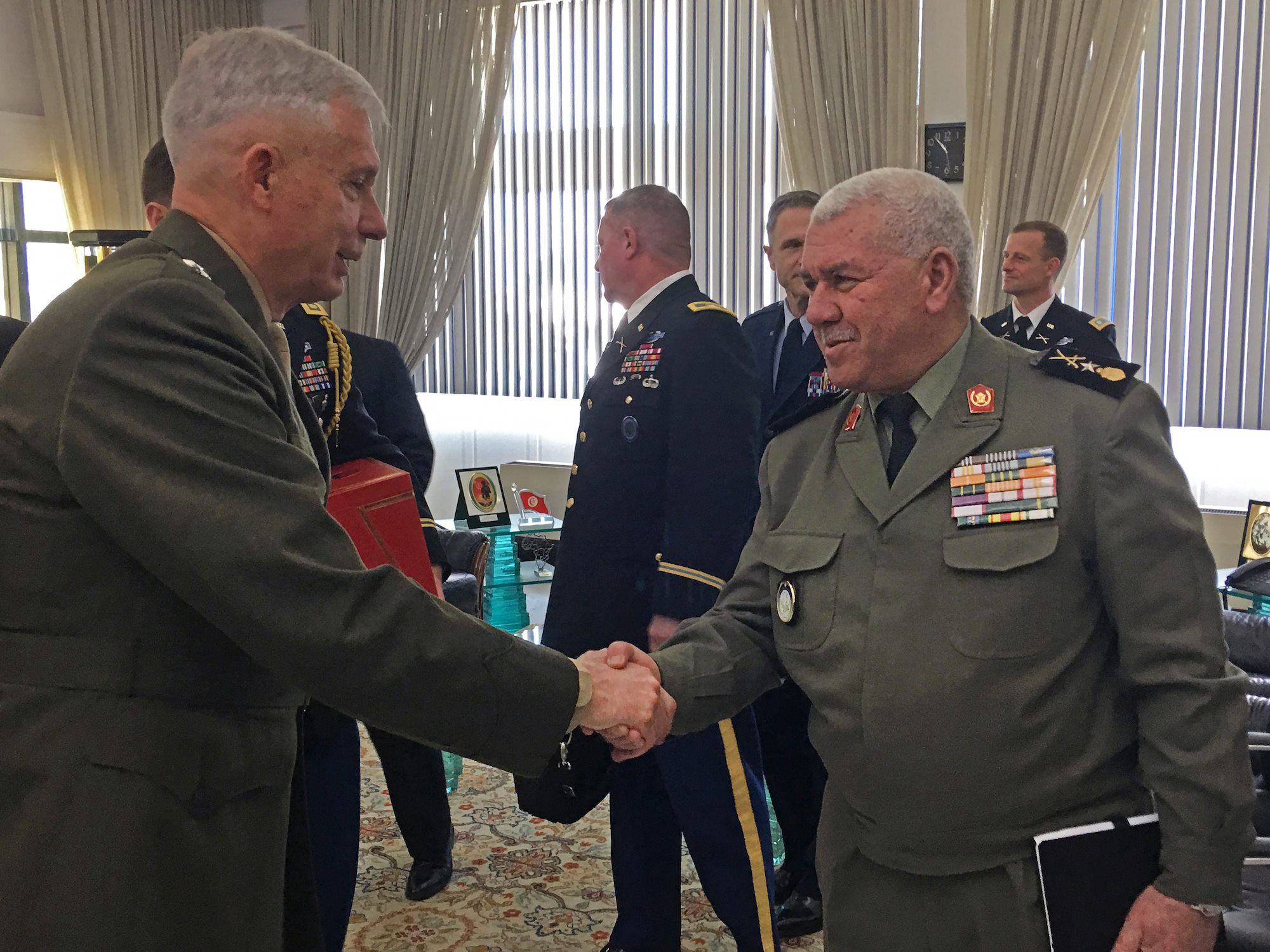 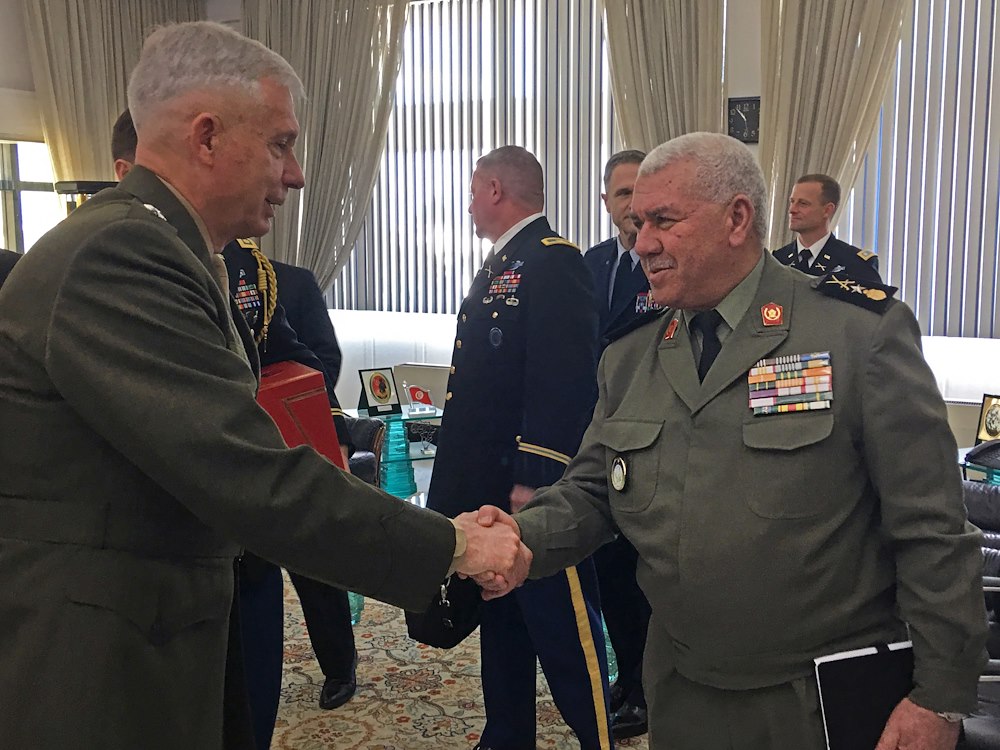 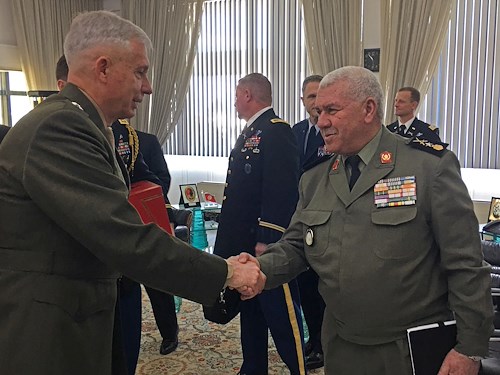 Marine Corps Gen. Thomas D. Waldhauser met with Tunisian military officials in Tunis, Tunisia May 16, 2019. Waldhauser was in Tunis to discuss AFRICOM’s role in the region as well as exploring common challenges and areas to partner with the Tunisian military in the future.
Share:
Download image
Photo by: U.S. Africa Command Public Affairs

TUNIS, Tunisia – The top U.S. commander in Africa met with Tunisian defense leaders in Tunis May 16 to discuss security concerns in the region and opportunities for strengthening partnerships.

Marine Corps Gen. Thomas D. Waldhauser, commander, U.S. Africa Command, along with U.S. Ambassador to Tunisia Donald Blome, engaged with the Tunisian minister of defense and service chiefs in a wide-ranging discussion addressing AFRICOM’s role in the region as well as exploring common challenges and areas to partner in the future.

“Tunisia is a strong and valued partner,” Waldhauser said. “They are actively engaged in AFRICOM multi-national military exercises, airlift missions, and share our commitment to degrading violent extremist organization influence in the region.”

Broad U.S. teamwork across government is providing key assistance to Tunisia. Earlier in the week, Blome also met with Tunisian Foreign Minister Khemaies Jhinaoui who expressed the importance of strengthening consultation and the sharing of experiences between the two countries.

“In addition to support for job creation and exports, the U.S. provides security assistance to support Tunisia’s military and police to counter terrorism and promote security sector reform,” said Blome. “Tunisia has come a long way in ensuring the safety of its citizens, and the U.S. will remain a steadfast partner in this endeavor.”

During the visit, Waldhauser stressed how AFRICOM will preserve a majority of its U.S. security cooperation, partnerships and programs in Africa in a continued effort to strengthen partner networks while enhancing capability. He highlighted how Tunisia continues to look for ways to partner with the U.S. and is demonstrating this by leading security-related exercises and taking on operations.

Tunisia participates in exercises such as African Lion, Flintlock, and the Phoenix Express series. In 2018 and 2019, Tunisia hosted part of Exercise African Lion. The exercise was designed to enhance tactics, techniques, and procedures for countering violent extremist organizations. In April 2019, Tunisia hosted part of the maritime security exercise Phoenix Express and will do so again next year.

These strong partnerships reflect a commitment by both the U.S. and Tunisia to maintain and grow a strong, prosperous, and secure partnership in the North African region. In North Africa, AFRICOM has largely seen significant progress and a desire for continued interaction and enduring partnership.

This partnership was on display April 29 to May 3 in Cheyenne, Wyoming and in Washington D.C. at the annual U.S.-Tunisia Joint Military Commission, a strategic bilateral engagement.. The Wyoming National Guard is paired with Tunisia as part of the National Guard’s State Partnership Program.

This Department of Defense program connects a state's National Guard with the armed forces or equivalent of a partner country in a cooperative, mutually beneficial relationship. The Wyoming-Tunisia relationship is one of the longest-standing partnership in the program’s history in Africa.

During the commission, Tunisia and the U.S. reviewed progress on joint military objectives over the last year.

These discussions continued during the AFRICOM and the Department of State meeting in Tunisia.

Tunisian Minister of Defense, Abdelkrim Zbidi, praised the level of cooperation between the U.S. and Tunisia. He specifically cited the increased training, equipment support against unconventional threats, and the U.S.- and German-supported electronic border security system, which will contribute to further security and stability of the country and in the region.

Advancements in Tunisian defense have been made in several areas including border security, counter terrorism operations, intelligence capacity, maturing and building defense institutions, as well as improved conventional and contingency force capacity.

With the recent fighting and instability in neighboring Libya, Waldhauser remarked on the challenging threat environment in the region and how solutions frequently require a combination of diplomatic and international efforts.

He also stated that Tunisia plays a critical role in regional security, emphasizing its sustained commitment to security and counter terrorism efforts. Tunisia has suppressed ISIS and AQIM affiliates and are actively working to prevent these groups from entering its territory. At the same time, Tunisia has also demonstrated a maturing airlift capability and ability to meet rapid mobility requirements.

“Tunisia is committed to countering terrorism and securing its borders,” Waldhauser said. “U.S. Africa Command is working closely with our Tunisian partners to support their counterterrorism efforts and strengthen conventional military capabilities.”

Working by, with, and through African partners to respond to crises allows AFRICOM to continue to build partnership capacity, while protecting U.S. interests and isolating, degrading, and defeating violent extremist organizations. 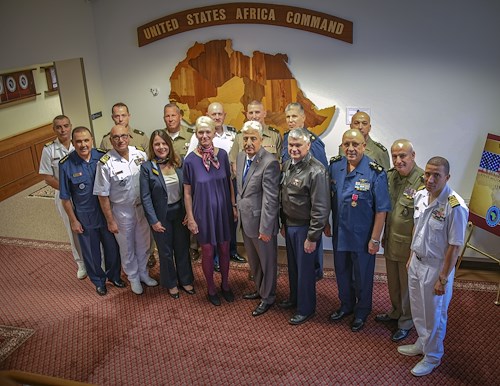 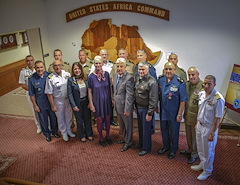