The creation of U.S. Africa Command has advanced this vision through a whole-of-government, partner-centric lens by building partner capacity, disrupting violent extremists, and responding to crises. Through consistent engagement, we strengthen our partnerships and assure our allies. Only together can we realize security goals vital for global interests and free trade.

On Feb. 6, 2007, then-U.S. President George W. Bush directed the creation of U.S. Africa Command. The decision was the culmination of several years of deliberation within the Department of Defense acknowledging the growing strategic importance of Africa. The new command would ensure DoD harmonized its efforts in Africa with those of U.S. Department of State as well as other U.S. government agencies.

U.S. Africa Command assumed responsibility for U.S. military activities in areas that had been part of three geographical commands previously, and now included all of Africa except Egypt. U.S. Africa Command was chartered to conduct sustained security engagements to promote a stable and secure political environment in Africa in support of U.S. foreign policy.

Following the decision by Bush to establish a command to oversee all U.S. military activities in Africa, U.S. Africa Command began to organize as a sub-unified command of U.S. European Command. The reduction of U.S. military forces stationed in Europe made space available for a headquarters in Stuttgart, Germany. U.S. European, Central and Pacific Commands (which previously held this responsibility for different parts of the continent) transferred their missions to U.S. Africa Command. Because of the relationship between security, development, and diplomacy, the designers of the new command included management and staff members from the Department of State, U.S. Agency for International Development, Department of Treasury, and other U.S. government agencies involved in Africa.

In 2021, U.S. Africa Command, with partners, strengthened relationships in Africa through sustained and effective engagement to advance a shared vision for regional security, stability and prosperity in Africa. We realize this vision through a whole-of-government, partner-centric lens to build partner capacity, disrupt violent extremists, and respond to crises.

In 2020 U.S. Africa Command continued to strengthen its relationships with African partners, strategic allies, U.S. government agencies and departments, and multinational coalitions to prevent, address and mitigate conflict in Africa. Throughout the year, AFRICOM worked to build African-partner defense capabilities. 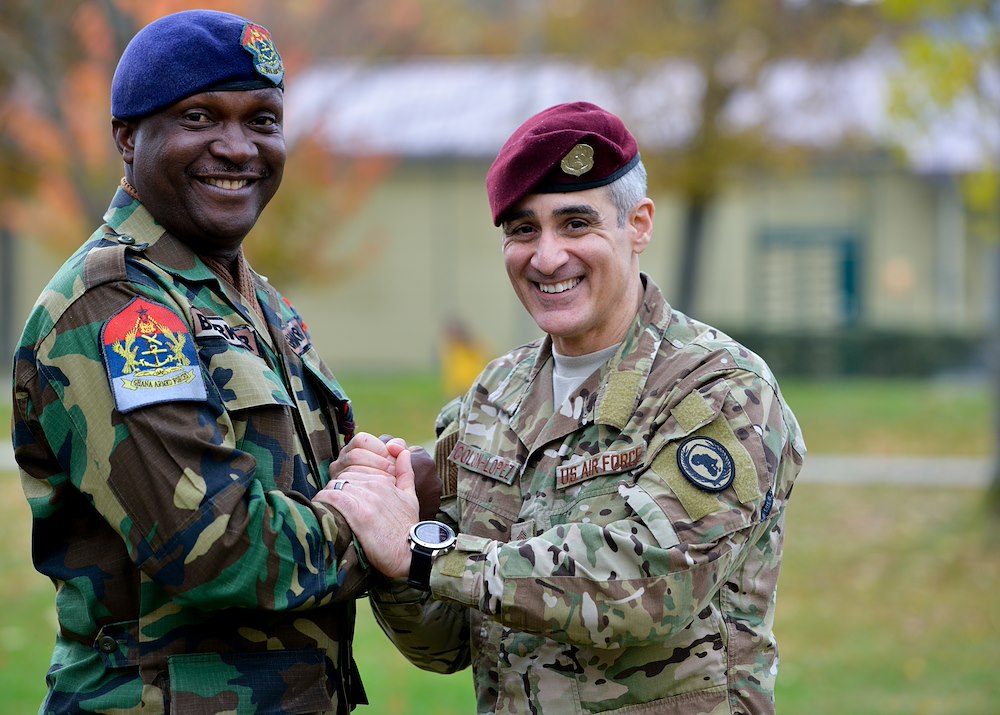 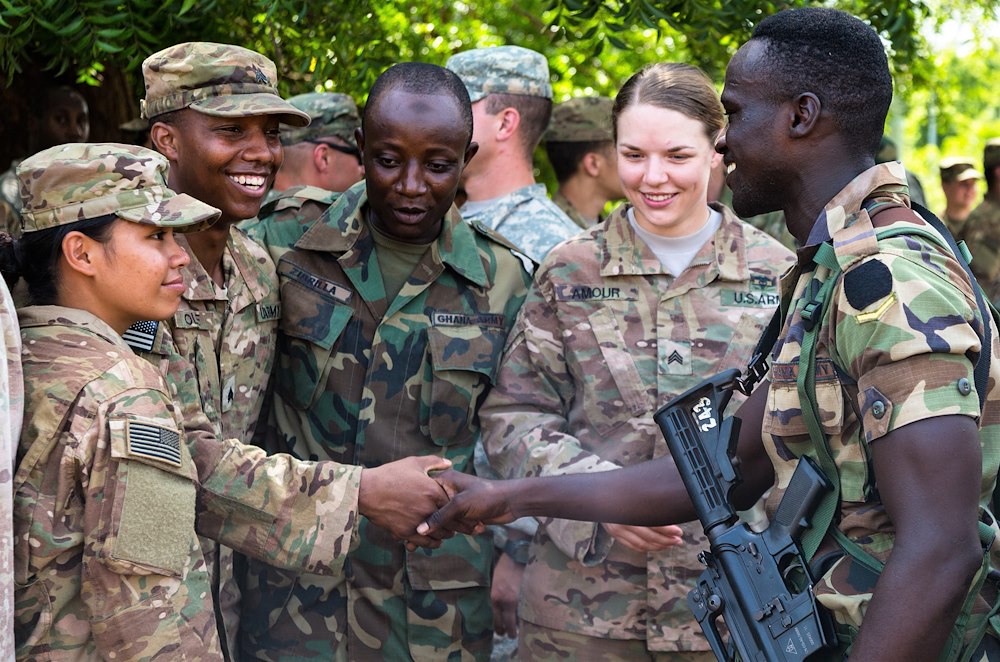 More than 2,000 military personnel from 24 African and other nations participated in the 10th-annual Flintlock exercise. African special operations forces and Special Operations Command Africa jointly planned and executed the event, which was designed to strengthen security institutions, promote multilateral sharing of information, and develop interoperability among counter-terrorism partners.

Through its programs and exercises the command, in cooperation with its partners, continued its mission to disrupt and neutralize transnational threats, protect U.S. personnel and facilities, prevent and mitigate conflict, and build defense capability in order to promote regional stability and prosperity.

Read more: Year in Review - a look back at AFRICOM's top stories in 2017 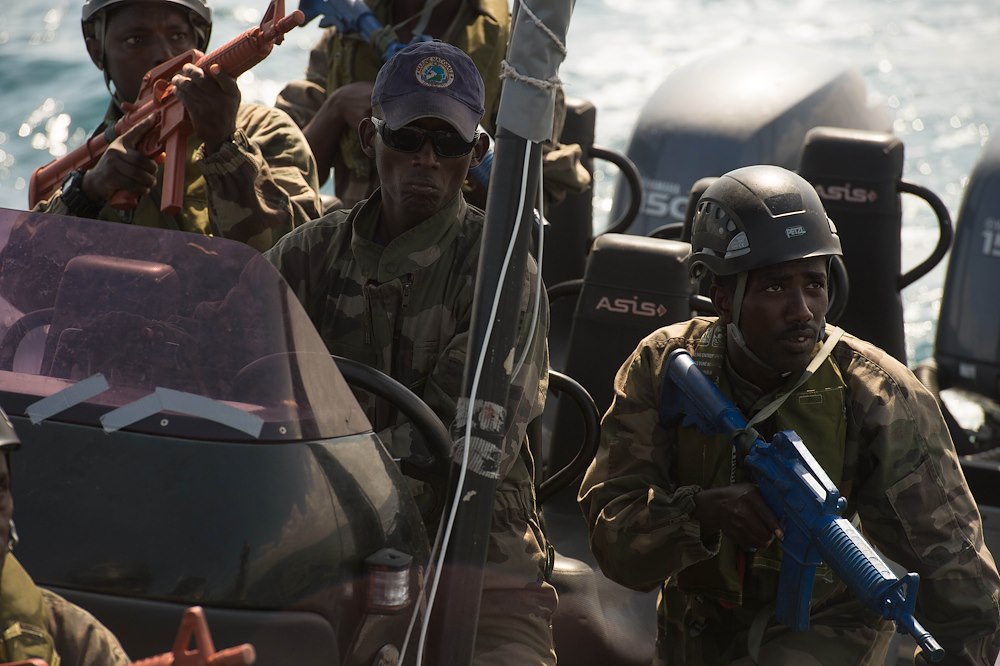 In cooperation with the Libyan Government of National Accord, AFRICOM conducted nearly 500 precision airstrikes to help Libyan forces drive Islamic State (Daesh) terrorists from Sirte. The U.S. remained committed to working with Libya and other partners to counter the evolving threat of violent extremists in North Africa.

In other engagements, AFRICOM continued to facilitate discussions among the U.S., several African nations and other interested countries, the African Union, the European Union, and the United Nations on improving logistics at the Africa Logistics Forum in Accra, Ghana.

In the largest contingency operation it has led, AFRICOM assisted USAID in responding to an Ebola outbreak in West Africa. AFRICOM established Joint Force Command – United Assistance to provide logistics and engineering support, as well as to train health care workers. Liberia’s military worked effectively with U.S. forces, demonstrating the success of a multi-year program to rebuild the Armed Forces of Liberia. AFRICOM also worked with countries in the region to improve their capacity to respond to future epidemics

The U.S recognized the Federal Government of Somalia in January 2013 and resumed military-to-military engagement with Somali security forces. AFRICOM continued to counter the terrorist threat posed by al-Qaeda and al-Shabaab through direct military operations, and by assisting troop-contributing countries in preparing their forces for deployment to the African Union Mission in Somalia. U.S. military personnel also deployed to support international stabilization missions in Mali.

Following the 2012 attack on a U.S. diplomatic mission in Libya, AFRICOM positioned additional personnel in Europe and Djibouti to respond to future crises. The East African Response Force and Special Purpose Marine Air-Ground Task Force – Crisis Response – Africa rehearsed these operations regularly. In times of crisis, elements of these units deployed to Africa to enhance the security of a U.S. Embassy, or if necessary to assist with the departure of citizens and non-emergency staff.

In 2012 AFRICOM also established a Women, Peace, and Security Working Group, which conducted seminars about the importance of recruitment, retention, and training of military women, as well as protecting civilians during peacekeeping operations.

U.S. military personnel deployed to central Africa to serve as advisors to forces of the African Union Regional Task Force, which worked to defeat Joseph Kony and other senior Lord’s Resistance Army leaders. The operation continued for several years in order to protect local populations. The U.S. also intervened to protect civilians in Libya. Because it was established primarily to focus on engagement and security assistance, AFRICOM had few assigned forces to conduct operations in Libya. AFRICOM therefore relied heavily on U.S. European Command and other commands for the necessary resources to carry out a non-combatant evacuation and military operations in cooperation with European allies and other partners.

Through the AFRICOM joint exercise program, U.S. forces continued to train with partner nations to increase the capability of African defense institutions to address regional security challenges. The Accord series, for example, focused on countries contributing forces to United Nations and African Union peace support operations, in which African forces increasingly shouldered the burden. The exercise program evolved under AFRICOM. Events become fewer in number and more regional in focus, and host nations welcomed the participation of an ever-larger number of countries and international organizations. All participants benefited. The ongoing series of Medical Readiness Training Exercises allowed U.S. personnel, for example, to work with African medical professionals in remote areas.

While Combined Joint Task Force – Horn of Africa began to support international efforts to combat piracy off the coast of Somalia, AFRICOM continued other maritime activities the U.S. had started before the creation of the new command. U.S. Naval Forces Europe and Africa facilitated exercises and security cooperation programs designed to improve maritime safety and security in Africa, especially in the Gulf of Guinea. 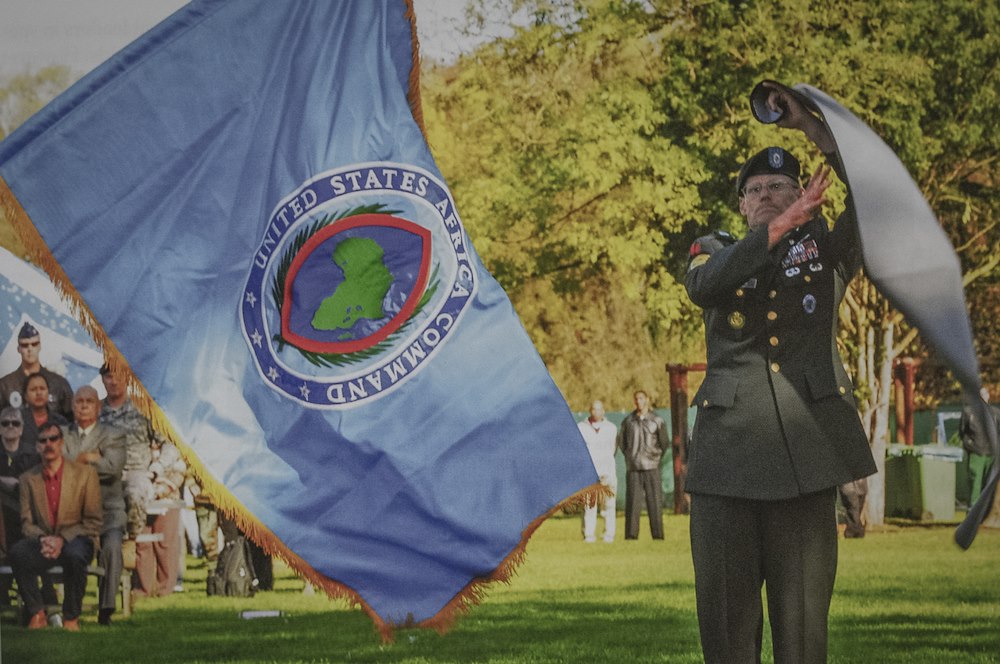 After the U.S. government announced the creation of AFRICOM, the first leaders of the new command began engaging with African officials. Offices of Security Cooperation increased from 9 to 40. By 2015 the number of Defense Attachés increased to better manage security cooperation programs in Africa.

Military and diplomatic engagements continue to be essential to the U.S. military strategy in Africa. Although the U.S. military had worked with African nations through American embassies and the U.S. European, Central, and Pacific Commands prior to 2008, the creation of a new command for Africa was controversial. The first AFRICOM Commander, General William E. “Kip” Ward, traveled widely in Africa to explain the purpose of the new organization and allay concerns. Subsequent commanders and senior AFRICOM officials continued to meet with senior African political and military leaders to discuss U.S. military activities. The number of Defense Attachés and Offices of Security Cooperation working at United States embassies in Africa increased in order to better align security assistance with U.S. diplomatic and African goals.

AFRICOM worked closely with U.S. diplomats and development officials to ensure military, diplomatic, and development programs worked in harmony toward U.S. national goals. It is also important to note that the response forces assigned to U.S. Africa Command to protect U.S. personnel and facilities allowed the U.S. to maintain a diplomatic presence in countries experiencing violence and instability.

The core mission of U.S. Africa Command remained to help African nations and regional organizations build capable and professional militaries that respect human rights, adhere to the rule of law, and contribute more effectively to stability in Africa. The primary tools for implementing this strategy were military-to-military engagements, security cooperation programs, exercises, and operations. Most of these programs required both military and diplomatic approval. As such, AFRICOM works closely with U.S. Embassies through defense attachés and offices of security cooperation.

A fundamental part of the mission of U.S. Africa Command was to respond to crises. In the first decade of the command’s history, it conducted contingency operations in Africa to protect civilians and defeat terrorist threats in Libya, support African Union operations in Somalia, Central Africa, and the Lake Chad Basin, and responded to the largest Ebola outbreak in recorded history. An enduring task was to protect United States embassies and citizens in the region.